Home / Dog Care / Why Does My Dog Follow Me Everywhere 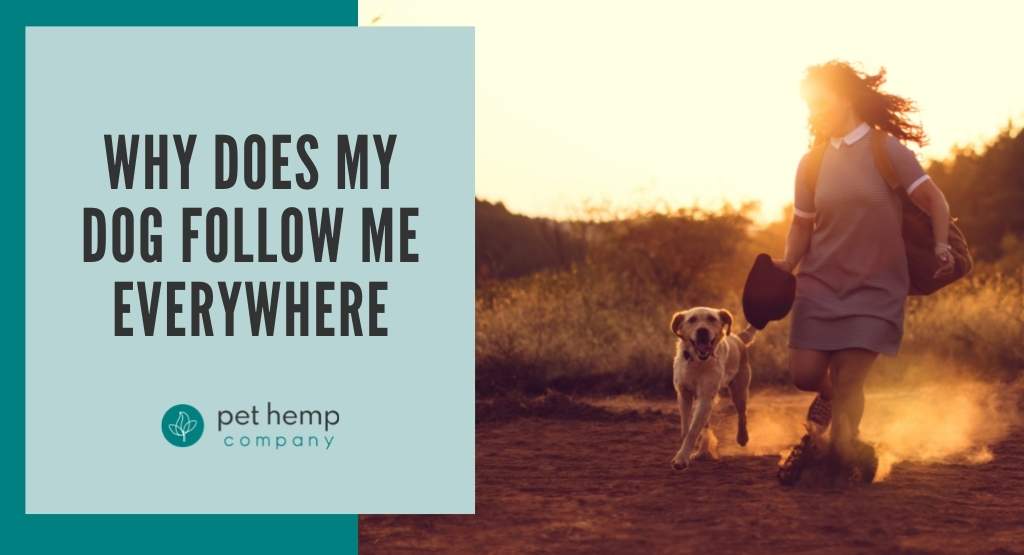 Ever had a dog follow you around everywhere like a second shadow? We find it silly sometimes and probably even annoying in some cases. But do you know why they do it? Knowing why dogs do this helps owners respond appropriately, avoiding stress for both the owner and the dog.

The American Kennel Club (AKC) refers to dogs who frequently follow their owners as ‘velcro dogs.’ Similarly, licensed holistic physical therapist Sally Morgan says that some dogs are pack animals, and the owner is usually the pack leader.

While it may be amusing to have your puppy follow you around, owners should be alert because it could also indicate that the dog thinks of its owner as its mother, as is often seen among puppies below six months of age, Dr. Rachel Barrack, a New York City veterinarian said. Dr. Barrack adds that rescued dogs often fear abandonment, and following their owner soothes their feelings.

AKC adds that by following you around, your dog believes it is a good way to get a treat as owners sometimes toss food to dogs near them. If you often do this – tossing treats to your clingy dog, chances are, you are reinforcing its ‘velcro’ behavior. In the same way, if you allow your dog to sleep in your bed, you are also encouraging your dog to be dependent on you.

Dogs usually hang out with humans who give them food or play with them. Erin Kramer, a licensed dog trainer, and owner of a dog training school, Tug Dogs, says that dogs often follow their owners because they take them to new and exciting places, and playtime often becomes almost like a magical experience. 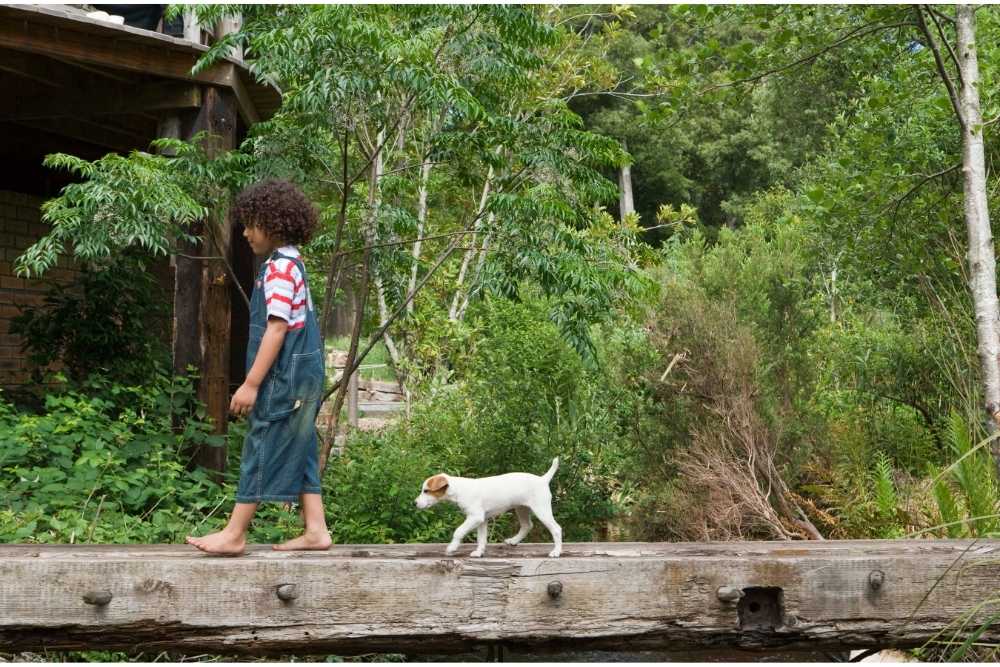 Is It Normal for Dogs to Follow Their Owners?

One of the reasons for the domestication of dogs is companionship. Also, humans can provide safety, food, and shelter to dogs, which makes the latter even more attached to their human caretakers.

According to greatpetcare.com, smaller dogs, such as those belonging to toy breeds, are often more clingy than other dog breeds. An example of this is the tiny Chihuahuas, bred to be our little companions. This breed tends to stick closely to its human parents and often follows wherever the human goes.

But the velcro dog personality is not confined to small breeds. Even large dog breeds or the so-called herding dogs also have a habit of following their owners around. Labrador Retrievers and Border Collies were bred for certain tasks, but they also have that knack for following their humans everywhere.

How to Stop Your Dog From Following You Everywhere

There are several ways to train your dog not to follow you everywhere. There are practical solutions, and there are ways to build more confidence in your furry friend. You may install baby gates or barriers to prevent your pup from sticking to you all the time. Toss a treat when you leave or a toy to make your puppy preoccupied and save him from distress.

Another great way to keep puppies off your personal space is to train them to heed the Stay Command. You may enroll your dog in a training school, or you may watch youtube videos on the subject. In applying the Stay Command, dogs often learn that it is fine to be left alone sometimes. Start with short distances and gradually step a few more distances away. In no time, your dog will catch up on its own.

Pethelpful.com also suggests that owners train the dog to go to its place, such as a mat on the floor. To make the place interesting, owners could fill it with toys or rewards to keep the dog busy doing its own thing.

If They’re Afraid of Everything Else

If your dog is more clingy in public settings such as in parks or another house, chances are, your dog is suffering from social anxiety. According to Holistapet.com, dogs who failed to learn socialization as puppies usually get overwhelmed by new sights, sounds, smells, and even new dogs, people, or locations. Socializing your dog at a young age is the best way to reduce unknown fears.

If Your Dog Is Bored

Your dog may be bored if it keeps following you when you do the most mundane things in the house. Dogs need stimulation, usually through playing. Dogs will avoid following their human parents if they are busy doing something on their own.

If They Are Scared of You Leaving

As mentioned above, dogs are pack animals, and they instinctively seek the company of fellow dogs or people. The AKC puts the number of dogs with separation anxiety at 14 percent.

Dogs with separation anxiety may exhibit destructive behavior. They could also frequently vomit or urinate. Dogs fear abandonment, so sometimes, they feel agitated or clingy as you prepare to leave home for work. Holistapet suggests changing the routine in the morning to break the dog’s familiarity with your ways before you leave home.

If Your Dog Thinks You’re the Boss

Apply the “stay” command so your dog will not get in your way and you go about your daily routine. Remember to give them a toy or a nutritious treat so they will be occupied with it as you go about your business.

If They Want More Attention

Perhaps your dog keeps following you around because it is a sign that it seeks some tender loving care from you. Maybe you have been too busy with life, and you have little, or no time for play or cuddling, your dog starts to feel neglected. Try taking your dog for a walk or play with your pup for a while to ease its feeling of neglect.

Do I Need to Go to the Vet if My Dog Follows Me Everywhere?

A dog who is bored or feeling neglected does not need medical attention. It just needs a little more attention from its owner. However, if your dogs exhibit strong nervous symptoms such as becoming frantic or aggressive when left alone, they may need to see a veterinarian as soon as possible. 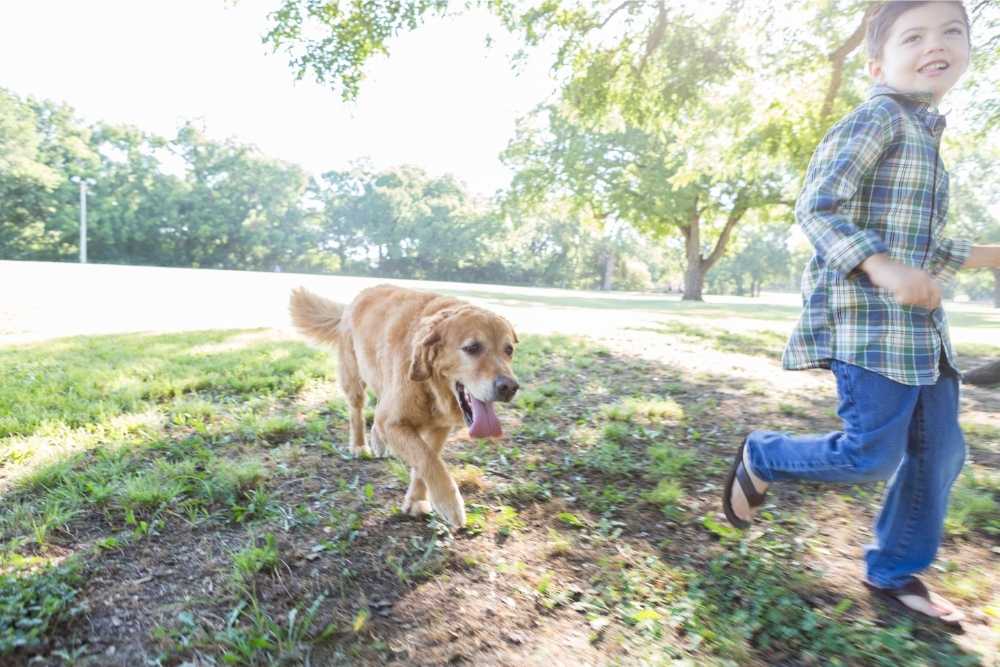 Why Your Dog Is Following You, Scientifically Speaking

AKC says some dog breeds seem to have that clingy quality in them, particularly the working dogs or the herd dogs. Examples of these are the Belgian Malinois, Beaucerons, and the Belgian Sheepdogs. These dogs were bred to work alongside their human caretakers, so being clingy or having that velcro attitude towards their owners are embedded in their genes.

Owners may find it irritating if their pooch keeps following them around. However, there are scientific explanations for why your dog exhibits such behaviors. One of which is the concept of Imprinting, which delves into the study of animal behavior.

In his Imprinting theory, Austrian zoologist Konrad Zacharias Lorenz said that attachment is genetically influenced. Lorenz claimed animals usually form an attachment to the first object or human that it sees upon birth. He proved this point by taking a group of goose eggs and placing the half under a goose mom and the other half in the incubator.

Lorenz ensured that when the eggs in the incubator hatch, he would be the first one that the hatched goslings will see. When the first group of eggs hatched, the goslings followed their mother goose. But the other half regarded Lorenz as their mom.

Dogs follow their owners if a strong bond between them is formed by reinforcement. This can be through the distribution of treats or by regularly giving food to the dog.

As mentioned above, dog breeds are bred as working dogs, and they are often reliant on their master’s instructions. These dogs are usually those that stick by their master’s side.

Sometimes, the dog wants to spend some quality time with its human owners. A psychology professor at the Canine Cognition Center at Yale University, Laurie Santos, said natural selection turned dogs into humans’ companions. This makes dogs ‘bonded’ with humans in the same ways as children are bonded with their parents.

How All This Following Benefits Your Dog

Does your dog get anything from following you around? For one thing, being with you all the time, the dog might get some treats or a pat on the head or a nice belly rub. These are positive reinforcements that encourage the dog to follow you even more. Dogs learn from our movements – the tone of our voice, our language, and our gestures.

This is how they know if it is meal time or if it is time for a walk.

If a dog is not destructive, it is fine, even if it has that habit of following you around. You have to apply the ways mentioned above to restrain your dog or to change its ways that would benefit both of you. Dogs can prevent loneliness among empty-nesters. Walking your dog regularly to keep it preoccupied can do wonders for your cardiovascular health.