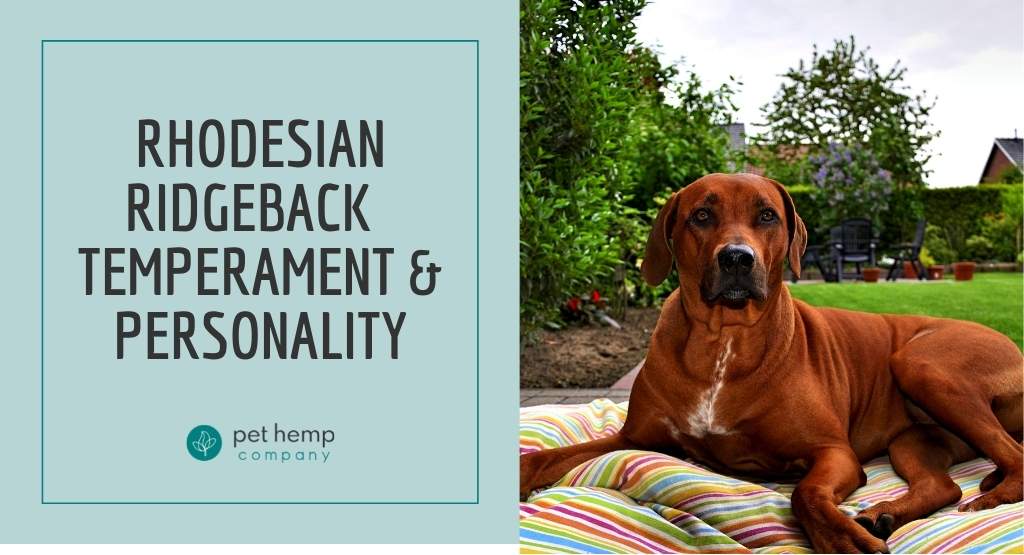 Who would imagine that a dog that owns the title of “lion hunter” could be a sweet and gentle dog? The Rhodesian Ridgeback dog breed originated from Africa and is known to be an energetic and outgoing watchdog. Renowned for its hunting skills, this breed was not recommended to be kept at home until after WWII. Nowadays, instead of hunting lions they will probably be hunting the grass in the backyard and running onto the sofa bed.

Unique for having a ridge running down its spine, the Rhodesian Ridgeback was bred to help hunters lure lions away during the 16th century. Though characterized as a sociable breed towards other animals, they’re not the type that will sit quietly inside the house. Instead, they will stroll around and damage everything, especially when bored. They are also territorial and are highly aloof with strangers. When not trained properly, these dogs tend to be aggressive and stubborn. Keeping them active, however, is the best strategy to prevent that. They may not be the typical cuddling-buddy, but the Rhodesian Ridgeback is a one of a kind dog. 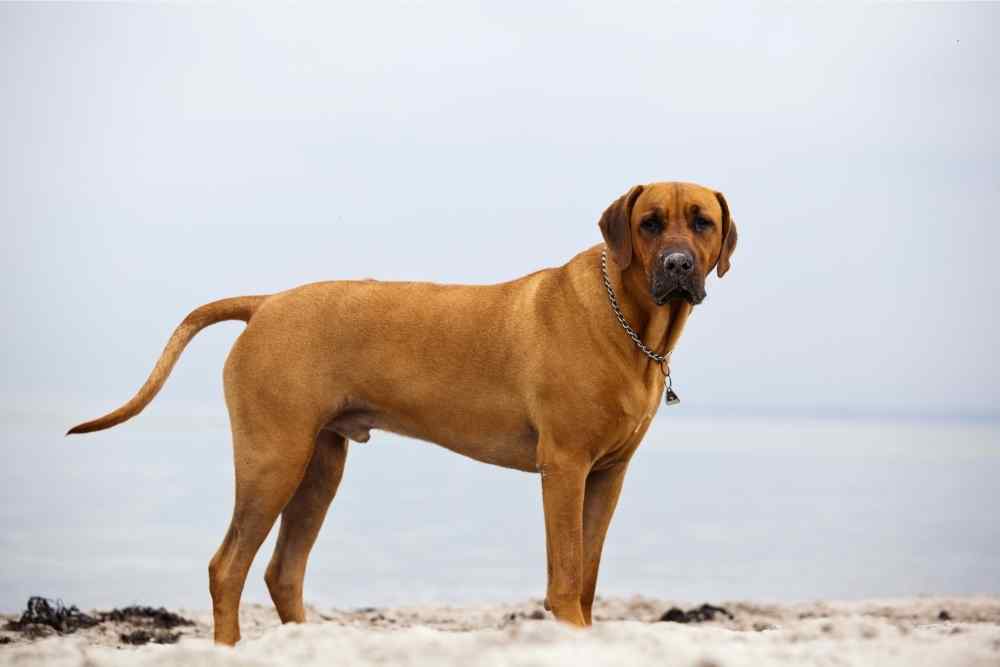 The Rhodesian Ridgeback is native to Africa. Tracing back its origin to as early as the 1500s, it is believed that the European immigrants brought these canines into the neighborhood primarily as a companion and protector for hunting the natives. The foreign settlers needed a way to lure away partridges, drag down a wounded stag, and guard their crops against prowlers at night. They are a mix of the native Khoikhoi dog and European breeds brought by Boers, Dutch colonists, including Great Danes, Greyhounds, and Terriers.

In 1877, Ridgebacks were brought to Zimbabwe (formerly Rhodesia), where they were bred with part-wild ridged-back dogs to participate in hunting games. As a result, the name “African lion hounds” was given to these dogs because settlers used them to hunt lions and boars.

The breed arrived in the U.S. during the early 1900s. It was standardized in 1927 by the South African Kennel Union, conforming to the proposed breed characteristics and behaviors of Francis Richard Barnes. In the year 1950, William H. O’Brien imported six Rhodesian Ridgebacks into the U.S. with the intention of proposing the breed in America. The American Kennel Club (AKC) officially accepted the breed to its official list in 1955.

Subsequently, in 1922, the Rhodesian Ridgeback Club of Great Britain was founded to further introduce these canines among English dog fanciers.

Famous for having a keen eye, high intellect, and aggressive instinct, Ridgebacks are gregarious animals who often go as a pack. Their appearance is threatening due to their wild instinct and above-average tractability. When trained well, they can be lovable and obedient dogs. Protective and caring, Rhodesian Ridgebacks are a good companion for children and a good running buddy for people who love physical activities.

Though chewing and nipping are two dominant behaviors in this breed, these dogs have a low chance of biting. However, when provoked or sensing danger, they may become reactive and may bite animals or people. Rhodesian Ridgebacks are trained by military or police organizations for security purposes such as search and rescue, detecting explosive devices, and tracing illegal drugs. Other than these predator-like traits, Rhodesian Ridgebacks are generally affectionate dogs.

The Rhodesian Ridgeback is generally a healthy breed as it is an active dog with an average lifespan of 10-12 years. 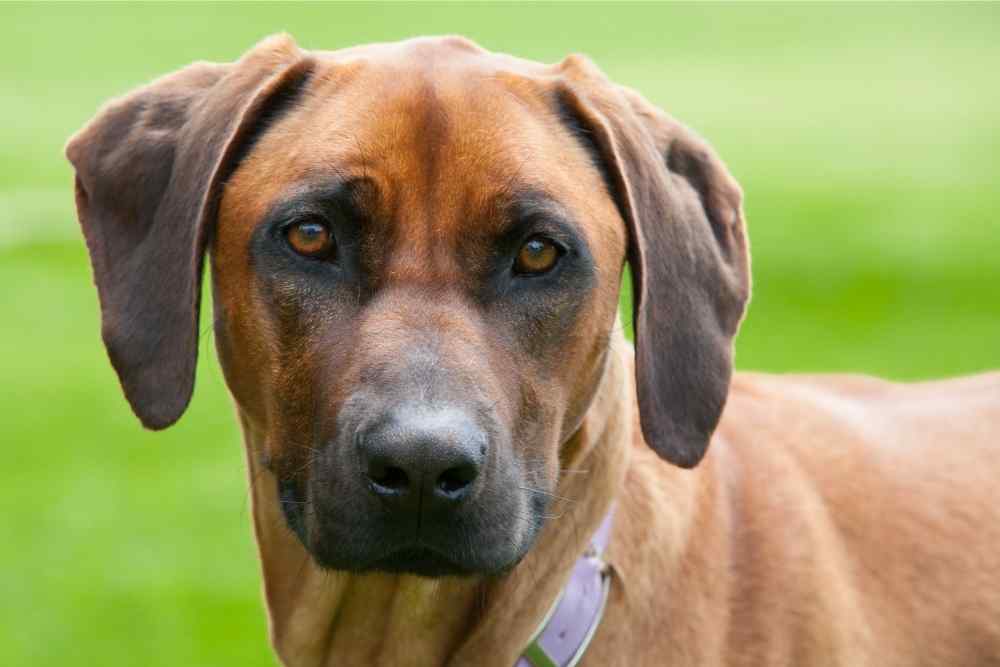 Ridgebacks are independent and dominant and require a firm, strong, and experienced owner to train them on obedience. Having an innate predator instinct, it’s important to properly socialize this breed at an early age. Exposing these dogs to various sounds, sights, animals, and people will help them become acclimated to the environment around them. Ridgebacks, like any other dog, require early socialization if you want to prevent them from becoming aggressive. It is always important to monitor your dog around people and especially children, regardless of their comfort levels.

Revered for being a highly athletic breed, the Rhodesian Ridgeback requires plenty of regular exercise. Aside from keeping them healthy, exercise helps them from getting bored. The more they are kept occupied, the less you have to worry about destructive behaviors. Mental exercises, on the other hand, are necessary to keep them sharp. Trainers engage these dogs in various training simulations that consist of gestures and actions such as pressing buttons with commands on them. This stimulates the dog’s mind to keep them from becoming bored.

This breed has smooth, glossy, and short hair requiring very little care. It sheds moderately throughout the year, even in the winter. Grooming every 4 to 8 weeks is suggested. This includes nail trimming, cleaning their ears, and brushing their teeth. Basic care will keep your dog at optimal health and will allow them to live happier, longer lives.

Rhodesian Ridgebacks have high appetites and like all dogs, are naturally carnivorous. This makes them ideal hunters! A good diet for this breed consists of high quality meats and vegetables including carrots, pumpkins, and sweet potatoes. Keep an eye out for food and treats with these ingredients.

The most efficient way to supplement your dog’s health and diet is to incorporate a high quality dry food that meets all of their nutritional needs. It is best to look for food that has little to no fillers such as grains. Food made with meat meal may sound like a good idea, but most of the time there is different parts of the animal in “meat meal” meaning, probably not the best parts either! This can result in a deficit of protein in your pet and at times may be the cause of health concerns down the line. It goes without saying that it is necessary for dogs to have a fresh supply of water at all times. It is important that your active pup remains hydrated, especially when they move all day long and are covered in fur!

Rhodesian Ridgeback puppies are curious and warm-hearted. They are also highly energetic and love outdoor fun. As they mature, they become quieter with an even temperament. Because of their natural independence and intelligence, training these dogs is extremely rewarding. A big part of a Ridgeback’s personality is their natural prey drive, making them aggressive towards unfamiliar animals and people. This is why it is very important that these dogs receive early socialization training.\

Compatibility with Other Pets

Known for being sociable, Ridgebacks mingle well with other dogs and even cats with which they grew up with. Among the different dog breeds, Ridgebacks are regarded as versatile and faithful guardians, protective of their family, and playful with the kids. However, although they are good with kids, both dog and child must learn to be tolerant and behave around one another. It is important not to leave a young child unattended around any animal no matter how well behaved that animal may be.

The Ridgeback’s background makes them naturally vigilant and brave, but with patience and consistency they are obedient and calm companions at home. This breed is gentle and docile around their owner but always on guard around strangers. Training them at an early age can help with their aloofness to different people and environments.

The Rhodesian Ridgeback’s muscular build and high athleticism make it a sturdy breed. However, studies have shown that it may be prone to some minor health concerns such as: 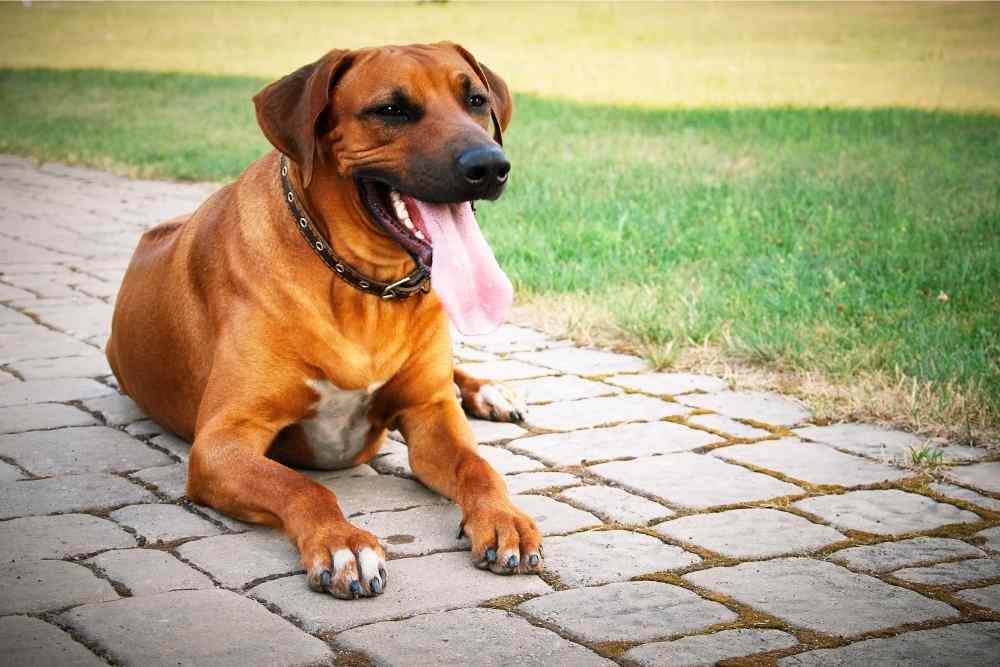 The Rhodesian Ridgeback is peculiar, with a well-defined ridge formed by the hair growing at the shoulder down to the hips. It has a slightly long but muscular body that combines speed, endurance, and power. Similar to the Vizsla breed, Ridgebacks are characterized as having a symmetrical canine feature.

Its large ears with rounded tips are set high on his head hanging down to the jawline. The neck is fairly balanced and long while the chest is deep, but not too rounded. It has a webbed foot allowing it to walk through sand dunes. It has a glossy-looking coat that is thick and dense.

The Rhodesian Ridgeback has a broad head with a long muzzle. The eyes are round and a color similar to its coat, ranging from a light wheaten color to a deeper shade of brown (and sometimes closer to the color red). The nose is black or brown. Due to their athleticism and build some people compare this breed to Australian Shepherds, Border Collies, Weimaraners, and Dalmations.

Taking Care of Your Rhodesian Ridgeback at Home

Renowned for its “ridge” running down the spine, the Rhodesian Ridgeback is a loyal but hard-headed breed. Caring for these dogs at home relies on the owner taking the authority at the early stage.

For Ridgeback puppies, a limited portion of food over a day is enough. Avoid giving them meals more than the required amount for their age as unstructured feeding could lead to obesity which may cause serious illnesses in the future.

Rhodesian Ridgebacks, like any other breed, need safe toys to chew on. Starting at 4 months of age, these hounds begin to have teeth. Giving these dogs safe toys would help to properly develop their teeth. Otherwise, they’ll resort to biting the chairs, sofas, and other household items.

Where to Adopt or Buy a Rhodesian Ridgeback

Adopting any pet is a big commitment! Even more so when it is a breed like the Rhodesian Ridgeback that requires a firm owner and constant stimulation. Here are some organizations that can help you find your new best friend!

The American Kennel Club (AKC): The AKC is an organization established for breeding, health, and information of all dogs. Think of it as a breed database! With more than 450 AKC Rescue Network groups in the United States, interested owners or breeders are welcome to connect with any of them for adoption purposes. The AKC marketplace has search options that help aspiring owners/breeders filter the list of dogs available for adoption.

Greenfield Puppies: This is a profitable business organization located in Pennsylvania. It was founded by the Hostetter family in 2000. It’s a good place to look for Rhodesian Ridgebacks as it implements a strict protocol for its breeders. All breeders are bound to have their puppies vaccinated before posting them on the website. It has official personnel who document and conduct a thorough background check on the breeders to implement a strict standard of breeding before opening them to the market.

Ridgebackrescue.org: Is an organization of volunteer breeders, owners, and other dog enthusiasts. It was established in accordance to the Section 501(c)(3) of the United States Internal Revenue Code. Founded in 1970, Rhodesian Ridgeback Rescue Inc., seeks adoptive homes for rescued Ridgebacks and provides proper education on rescue and adoption.