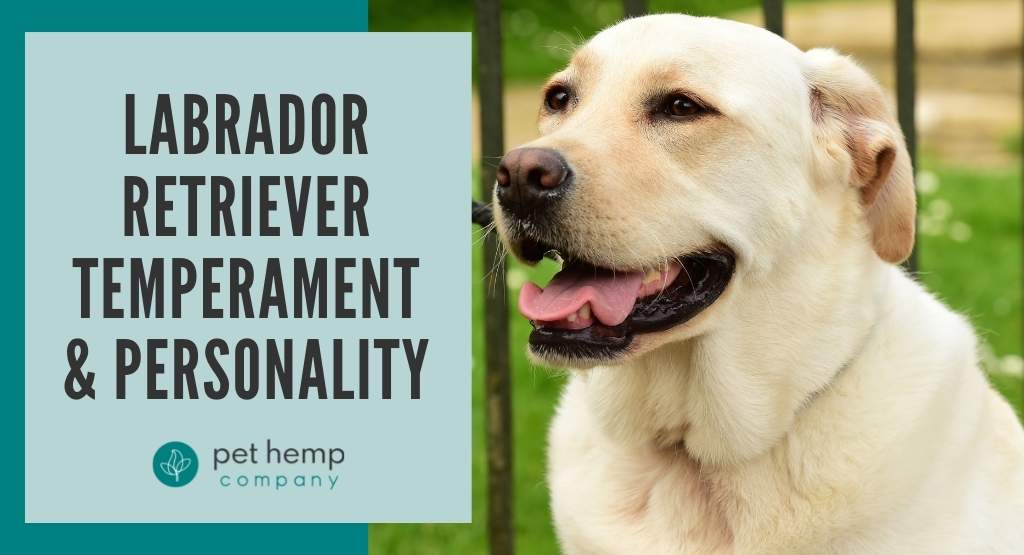 Labrador Retrievers are notorious for being amiable, smart, and most of all friendly. One can easily recognize their breed since they are primarily selected and trained to be human companions. They are always featured in magazines and news articles due to the geniality and popularity among dog owners.

Labs can be seen as a part of law enforcement for detection and screening, or a therapy dog that helps people with disabilities such as blindness and autism. Their loyalty, kindness, and obedience makes them the best candidate for these roles and also being the best buddy at home. Labs are considered the most versatile breed among dogs.

Labs are identified with having a medium well-built body that is perfect for their easygoing and sporty lifestyle. They are distinguished by their kind and knowing eyes; a thick muscular tail that can be called the “otter tail” due to its likeness to the actual thing;  their right-sized muzzle that’s connected to a brawny jaw and a clean defined head; and lastly, their slick, short, and weatherproof undercoat that insulates them from the cold.

Depending on the Labs’ gender, their sizes vary. Females are normally smaller and their height ranges from 21.5 to 23.5 inches, with their weight ranging from 55 to 70 pounds. Their counterparts, the male Labrador Retrievers stand 22.5 to 24.5 inches tall and weigh about 65 to 80 pounds.

Labrador Retrievers are very fun to be with, and anyone will want to spend their whole life with the best companion like them. Their average lifespan is between 10-12 years.

Labs are known for being one of the friendliest dog breeds out there and we can’t stress it enough. They wag their tails to strangers, fellow dogs and are the most loving with kids. Labs make a great partner because of their affection and loyalty to their owners. They have become a popular and favorite breed.

That is why they are always featured in photos, commercials, and news where they stick with their owners no matter what. They have saved someone from an accident, or are just plainly eating dog food in a commercial, being a good boy – or girl. This dog breed is remarkably obedient and intelligent, making training easy.

You’ll find that Labrador Retrievers’ motto in life is to please their pet parents and have fun. They are playful and hyperactive. A bundle of energy that’s also great for cuddling.

With their high level of energy, Labrador Retrievers need their exercise. The recommended activities for Labrador Retrievers are daily walking, running in the park, training, chewing on some pet toys, and fetching games – anything that helps them release their stored energy. Be careful though, they are known to be very enthusiastic about being active that they exhaust themselves if you do not intervene and stop the playtime.

Labrador Retrievers who lack activity may resort to undesirable behaviors like chewing some items in your house or digging a hole in your backyard just to release some of their pent up zest. So always remember to keep them busy and train them properly.

Training is crucial and yet natural for this breed. They produce an exemplary outcome for Labrador Retrievers themselves and their owners. They are easy to train due to their unparalleled enthusiasm and intelligence. It’s recommended to start training during their puppy stage so that they’ll develop good manners and social skills early on.

Lab puppies are adaptable, and it’s the right time for the owner to get to know more about their dog and rectify any undesirable habits that they may take into adulthood. There are different types of training for a Labrador Retriever depending on the career they are going to take.

This dog breed, despite its name, Labrador, actually came from Newfoundland, which is an eastern province in Canada. They were initially called St. John’s Waterdog or Newfoundland dogs during the early 1800s. The Labradors were brought to Britain through ship trading because they were known to be great companions of fishermen.

Englishmen took notice because they recognized the skills of the breed as great retrievers, and used them for sports like hunting or water fowling. Labrador Retrievers have always been considered as an awesome helper or partner throughout history with their personality and traits. Their short weather-proof undercoat is perfect for outdoor activities and water sports.

Their dedication to their owners and trainability are highly praised even then. The Labs were almost extinct by the 1880s because of the new tax and government restrictions made in Canada for dog owners. They disappeared from their homeland, but thanks to the English fans of this breed and the Malmesbury family, they were protected and saved.

In 1903, the Kennel Club acknowledged the Labrador Retriever as an independent and specific breed. The AKC or American Kennel Club filed it’s first dog breed information in 1917. Years passed and the Labs from Britain were imported to the US and are now among the most favorite breeds in America.

The energetic and easy-going lifestyle of a Labrador Retriever makes them healthy in general, but like other breeds, they can still have some health issues that most pet owners should look out for. It doesn’t immediately mean that your Labrador Retriever will acquire these illnesses or diseases, but it’s good to be informed about them.

Most of their common health problems involve musculoskeletal and eye-related issues. This doesn’t discount the other possible health problems that the Labrador Retriever may acquire. Here are the common diseases and illnesses with Labs:

Hip Dysplasia can be diagnosed by having your Labrador Retriever go through Hip Evaluation and X-ray Screening. Labs with this condition are best not to breed to avoid passing on the DNA.

There’s currently no cure for this degenerative disease, but most dogs can adapt well as long as they stay in a familiar place.

Treatment available for dogs that have Cataracts involves removal surgery, which normally has a high success rate.

Phenobarbital and Potassium Bromide are common medications for pets. It is highly advisable to have your labs undergo a full-scale evaluation and EIC DNA test to detect diseases as early as possible. This will also help breeders to determine which dogs are okay to prepare for breeding.

How to Care For Labrador Retriever

The Labrador Retriever is sociable, energetic, and loving. It is important for them to be around their human companions, and to have their playtime and exercise like running outside and playing fetch in the park. They love affection and attention from their owners. Leaving them alone for too long at home or in your backyard may result in an unhappy Lab.

Given their enthusiasm for activities and burning energy, they enjoy chewing anything for hours. Giving them a toy to chew for hours will keep them happy and content. Another thing to consider is to settle them in a kennel or a place of their own so they will not create a mess or destroy things in your house accidentally. Since they are overly joyful creatures. We don’t want missing remotes every week.

Nutrition and Feeding for Labrador Retriever

Feeding them high-quality food is the best option. It also depends on if you want them to eat commercial food or homemade meals. Knowing your dog is fundamental in learning how to feed them properly. Not all dogs are the same. The amount of food you need to feed your Labs depends on their age and size. But in general, they should be fed 2-3 cups of dry food spread out to 2 meals a day.

Keep watch on your dog’s diet since some dogs can easily become overweight. Treats are helpful in training and keeping your Labs happy, but anything excessive is always not a good idea.

The Labrador Retriever has two-layer coats that are top and under. These 2 layers help them become more resilient to cold and water. Their coat is one of their best assets since they can easily go in and out of the water without ice crusting in their fur. You’ll find that most Labrador’s coat color is black, golden yellow, or chocolate brown.

Black coats of Labrador Retrievers were a favorite by breeders before but the demand for golden yellow and chocolate brown increased, which made them a staple color for Labs too. There are some fans that breed Labs with white and fox red coats, which can be considered rare. Grooming isn’t much of an issue with Labs as they are easy to bathe.

Regular nail trimming should be done. Long nails cause Labs to be uncomfortable with their feet. This also helps to avoid scratches and being hurt when your Labrador Retriever excitedly jumps on you. Brushing their teeth often to keep your canine friends clean and healthy is a must. It helps prevent any mouth issues like gum disease, the buildup of plaque and tartar, and tooth decay, which causes bad breath.

While brushing your dog’s teeth, it’s a good time to check if there are fractured teeth or any orthodontic problems. One thing to consider that is common with Labs is the excessive shedding of their coat. Having a vacuum for the area where your Lab mostly hangs out is a thing to consider to manage all the furs that fall out. Brushing their coats frequently helps with their loose hairs.

Remember, grooming is not just about making sure they are polished but it can also be a time for you to spend more time with your dog and check for potential health issues.

The Labrador Retrievers’ friendliness is known to be a good trait of a family dog. They are easy-going, lovable, and have low aggression, which makes them okay with being touched, petted, and cuddled. Labs enjoy being with kids since they can match their energy and glee. They will happily play together for hours and are very affectionate towards children.

It is important to supervise them, no matter how kind and friendly your dog is. This is to avoid any biting or tail and ear pulling on either side. Training your dog on how to act towards children will help them have a better and safe interaction. The same goes for your kids, you need to teach them the do’s and don’ts when they’re playing or interacting with dogs. Reiterate to your kids not to bother any dog when they are sleeping or eating.

Labrador Retrievers are a sociable breed and with the right amount of training and exposure to humans and other animals, they’ll go along well with other pets.

It’s sad to even acknowledge that there are some owners that get themselves a Labrador Retriever and end up not being able to care and be responsible for them. This is why there are specific breed rescue groups that take in and look after these neglected Labs. Dogs that are rescued are put up for adoption and these groups ensure that they are given to families that will provide a new home where they will be loved and taken care of.

More About This Breed