Buy One Get one free Sitewide! Use Code : NYE 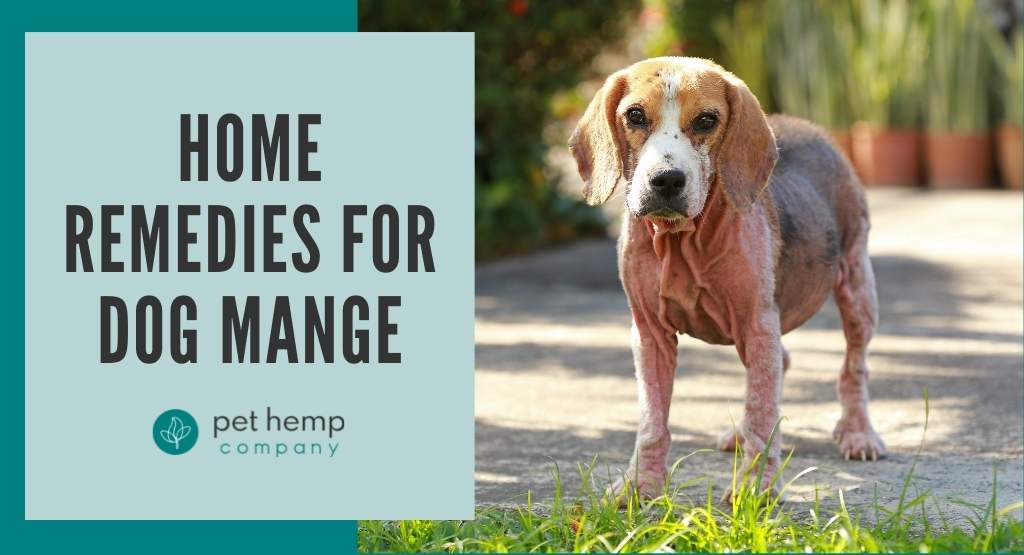 Ever seen a “statue” dog? Their skin is so rough, patchy, and crusty they look like they might turn to stone, with blistering red sores and oozing wounds all over. This unsightly look isn’t due to dirt or a lack of hygiene—this condition is called dog mange. This article will explore dog mange treatments and home remedies.

There’s no better cure than prevention, and knowledge about your pet’s condition can make a world of difference!

What is Dog Mange?

Mange is a type of skin disease acquired by dogs, especially those that are neglected or left on the streets. However, it can still happen to our beloved pet canines at home. The condition is highly infectious due to the mites that cause it. These pests can jump or transfer from one dog to another.

Mange causes intense itching on the skin. The irritation can result in hair loss and open wounds, making the skin crusty or flaky. When you look at a mage-infected dog infected, you may think it’s gross and hopeless because of its appearance. But, even the most severe stage of this disease can be cured.

Mange can come in different forms. A different kind of mite causes each type.

If you have a kid, you probably know what scabies are. Sarcoptic mange is the equivalent of scabies for dogs. That is why it’s also known as canine scabies. This type of mange is caused by Sarcoptes scabiei, eight-legged circular mites that burrow into the skin. The feces and eggs left behind in their tunnels cause an allergic reaction that makes the skin very itchy. Sarcoptic mange is highly contagious.

Demodectic mange, more commonly known as Demodex, is caused by mites called Demodex canis. These parasites have an elongated shape, resembling a cigarette with spiky legs on the side. Demodex mites actually live on all dogs; they naturally inhabit the skin and hair follicles and usually don’t cause any issues with their hos as long as their numbers are in check.

When their population grows out of control, that’s when they can wreak havoc on your dog’s skin. These mites are not transmittable to other species, so Demodectic mange is not contagious.

A non-burrowing mite called Cheyletiella mites causes Cheyletiellosis mange. They live on the surface of your canine’s skin. They are large enough to be visible to the naked eye and have been described as walking dandruff. Imagine dried skin flakes coming to life and crawling on your dog’s skin. These mites have this appearance because they carry your dog’s skin scales on their back.

Cheyletiella mites are characterized by their prominent palps, which have a strong hook structure. Their body has a waist. Cheyletiellosis mange is contagious and can be transmitted easily from one host to another.

What Causes Mange in Dogs?

Mite infestation is the cause of mange in dogs. Depending on what kind of mite they were exposed to, they could either get Sarcoptic or Cheyletiellosis mange, which are both highly infectious. These conditions are passed on easily from an infected animal to your pet. Demodectic mites, however, usually are harmless in a healthy dog. Still, they can cause harm to a weakened canine.

The severity of the condition depends on the overall health of the dog.

What Causes Demodectic Mange in Dogs

Demodex canis is the type of mite that causes demodectic mange in dogs. These mites are usually benign as they are part of the skin flora of dogs and even humans. They live deep in the hair follicles of the canine host. Demodectic mange happens due to a genetic aspect or a frail immune system. When the host is weak, it has a hard time controlling the spread of these tiny creatures, and the mites overwhelm their already compromised health.

What Causes Sarcoptic Mange in Dogs

Exposure to an area or other animal with Sarcoptes scabiei causes Sarcoptic mange in dogs. This condition is very contagious. Sarcoptic mites burrow into the skin and feed on it. Adult mites go through the reproduction stage rapidly. The eggs and feces they leave behind cause intense itching in the skin.

What Causes Cheyletiellosis Mange in Dogs

Cheyletiella spp is a parasitic mite that causes Cheyletiellosis mange in dogs. Your canine friend may get it from close contact or shared areas with other animals infected with the skin disease. Cheyletiellosis mange is highly contagious. The mites crawl and move through the surface of the skin, giving an illusion that they are “walking dandruff,” which the condition is commonly known for.

Although Cheyletiellosis mange can spread through the entire body, it’s normally prevalent at the back of your furry companion.

What Are the Symptoms of Dog Mange?

Not all dogs that have mange show symptoms, but that doesn’t mean they don’t have mites, or the condition will not worsen over time. It is still essential that you get your pet checked by a veterinarian and go through tests and examinations.

Here are the common symptoms of dog mange that you can easily notice at home:

Demodectic mange has the same symptoms as the other mange types, such as hair loss, scabbing, sores, and extreme itching. Note that Demodex symptoms are categorized into three forms: localized demodicosis, generalized demodicosis, and demodectic pododermatitis (which only affects the paws).

How Do You Tell If A Dog Is Afflicted with Localized Demodectic Mange?

Localized Demodectic mange typically affects puppies and causes hairless patches in the face or front legs. It’s called localized mange because it only affects small areas in the body and remains exclusive to those places. The symptoms are usually mild, but it can sometimes progress to generalized mange.

How Do You Tell If A Dog Is Afflicted with Generalized Demodectic Mange?

As the name suggests, generalized demodectic mange affects the whole body. The redness and hairlessness are spread out. Scaling or scabbing is more severe, and lesions are plainly visible.

Symptoms of Sarcoptic mange typically appear within 10 days – 8 weeks after being exposed to the mites. The first areas where the parasites spread are elbows, ears, chest, and belly.

Sarcoptic mange causes extreme itching and irritability, but the skin damage is mainly caused by your dog excessively biting and scratching the infected area. The visible indicators of Sarcoptic mange include hair loss, oozing wounds, and skin crusting.

The most notable symptom for Cheyletiellosis Mange is scaling or flaking of the skin and dandruff on the fur. It causes redness on the skin, itching, scaling, and hair loss that is mostly concentrated on the dog’s back or upper body.

If your dog already shows symptoms of mange, seeking a veterinarian to properly diagnose and treat your pet is undoubtedly the best advice anyone can give. But, finding practical ways to manage the infection ourselves can also benefit your dog. This potentially helps us prevent mange early on. Read further to learn more about treating different types of dog mange at home.

How to Prevent Demodectic Mange in Dogs

Since a chief factor of Demodectic mange is poor immune functioning, maintaining good health for your dogs will prevent this disease. Dogs that seem to always have issues with mange should not breed so their pups won’t suffer the same fate.

How to Prevent Sarcoptic Mange in Dogs

Although there are no surefire ways to prevent mange in dogs, it’s best to avoid areas like parks where potential transmissions can happen. Maintaining good health is the top priority as mange thrives in weak dogs. Ensure your dog isn’t stressed. Bringing them to the vet regularly and getting all necessary health treatments is definitely important and plays a tremendous role in preventing sarcoptic (and other types of mange) from infecting your dog.

How to Prevent Cheyletiellosis Mange in Dogs

Since Cheyletiellosis mange is acquired through transmission, avoiding infected dogs, maintaining a clean environment, and making sure your canine friend is always in prime condition helps prevent mange from spreading and becoming severe. Mites that cause mange can live in the area for some time, so it’s vital to clean all spaces and items that your dog may be in contact with during their treatment. This ensures the infestation won’t repeat and become cyclical.

What Are the Best Home Remedies for Dog Mange?

It’s not far-fetched to want to treat your canine friend as soon as you notice something off about them. This is why we look for ways to help our dogs feel better using items that we readily have available. There are different reasons why we look for home remedies either for cure or for prevention. The following is a list of suggestions you can try for treating a dog with mange.

Organic yogurt contains good bacteria that may help ease mange symptoms when applied to the infected area. Rinse off after 15 – 20 minutes.

With its thickness, honey creates a barrier that prevents further infection from spreading. Combined with its natural antibacterial properties, this home remedy may soothe and heal sores faster. Apply it to the skin for 15 minutes and twice daily.

Olive oil alleviates the itch and helps heal dry skin. It’s advised to apply it directly to the affected area for 15 minutes two times a day.

Aloe vera is well known to have soothing antiseptic properties that can improve mange symptoms. Putting it directly on the infected skin may help treat mange.

Taken orally or mixed with your dogs’ food, apple cider maintains your dog’s health, which in turn helps get rid of mange faster. A stronger immune system will definitely help fight off the infestation.

Lemon’s acidic properties can prevent other types of infection that compromise your dog’s health. Be careful and gentle in administering it to your dog’s skin as it may sting the lesions and open wounds.