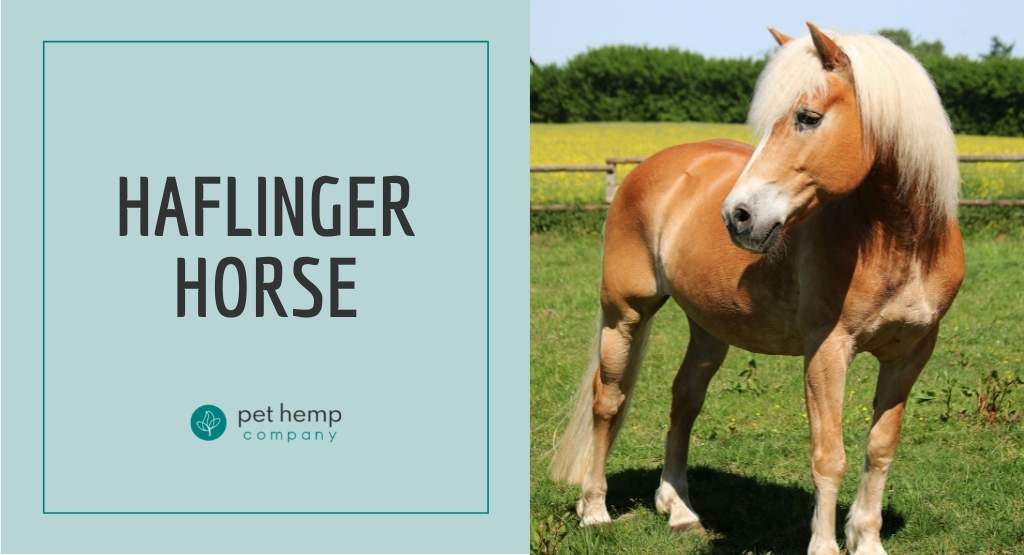 The Haflinger horse is a rather peculiar and instantly recognizable breed due to its smaller, stout size. Despite its shorter height than other breeds, the Haflinger is an essential workhorse used for driving, riding, pulling, and carrying.

The Haflinger horse is more than meets the eye with its distinct chestnut-colored mane and its standout physical figure. Read on for more about the Haflinger Horse.

When placed in a lineup of other horse breeds, the Haflinger would be the odd one out for being on the shorter scale. However, don’t let this horse breed’s size fool you. Haflinger horses are a sturdy and robust breed that can go hoof-to-hoof with any stallion.

Haflingers are stocky, bolstering strong hooves. It is highly discouraged for breeders to breed these kinds of horses under their minimum size.

The average size of a Haflinger horse ranges from 13 hands (52 inches) to 15 hands (59 inches) in height. This stance makes this breed one of the easier to mount and dismount from riding. As for weight, a Haflinger breed may range somewhere between 800 to 1300 pounds. Despite being similar in size to a pony, Haflinger horses can carry full-sized adults and pull carriages.

The Haflinger breed makes a great stallion for driving, trail riding, and even therapeutic riding programs because of their gentle temperament and calm demeanor. These stallions are mellow and always responsible in regards to working. Haflingers are also very much people-pleasers are enjoyable to have around.

How to Care for a Haflinger Horse

In combination with its mountain origins and stocky build, the Haflinger horse is a unique breed that requires specific care. With that being said, their gentleness and enthusiastic personality make training and caring for Haflinger horses an enjoyable and rewarding experience. Haflinger horses have very specialized physical characteristics that need attention.

But through regular exercises such as walk canters and trots, medical checkups, and the proper nutrition regimen, Haflinger horses can live a healthy and active life. Haflinger horses are known to live for up to 40 years.

Because of the shorter size of a full-grown breed, avoid training a Haflinger too early in its physical development. Although a Haflinger may appear to be fully developed earlier than other breeds, it is best to start these horses performing groundwork for the first two years to avoid future health problems.

Once a Haflinger reaches age three or four, you can begin backing and preparing your horse for riding and more strenuous conditioning. With every horse breed, it is important never to push your horse past its physical capabilities. Especially with Haflinger breeds, it can be detrimental if you work your horse too hard too early.

If you begin rigorous training too soon, your horse may experience specific issues such as joint discomfort that may be more difficult to alleviate without early precautions.

Nutrition and Feeding for a Haflinger Horse

As with maintaining any healthy animal, especially a horse, a nutritional and carefully selected diet is crucial to keeping them living a solid and healthy life. As mentioned previously, the Haflinger breed resides more on the shorter side of the spectrum. So, Haflinger horses tend to require little to no grain as part of their diet.

However, if a Haflinger horse requires grain due to its workload, choosing a low-sugar and low-starch option is necessary. Haflingers also need very little hay to eat, so providing hay in a slower feeder to disperse smaller portions can be helpful. One particular pleasure Haflingers enjoy eating is grass. However, many Haflinger horses should not consume grass because of its naturally rich sugars.

To avoid the horses partaking in such a meal, a grazing muzzle when they are out on the pasture can be beneficial to ease one’s mind of worry. Providing a grazing muzzle can be incredibly helpful if a horse has any particular metabolic issues.

Haflinger horses are known for their distinct coat coloring. They are known for their chestnut coat paired with a cream or white mane and tail. Although the coat can range from light to dark, the overall coloring is a chestnut brown. Haflinger breeds only require a moderate amount of grooming.

Although its thick mane and tail may require extra attention and care, a quality leave-in detangler and proper comb can help with this issue. It is also vital to pick out your horse’s hooves regularly. Especially before and after riding, keeping a Haflinger’s hooves clean is an essential part of the grooming process.

Haflinger breeds are healthy horses, but a few potential health problems may arise if not treated or groomed correctly. Laminitis is a painful hoof condition that can result in coffin bone, also known as pedal bone. Laminitis can create a sinking and separation from the hoof wall, which can cause discomfort for the horse.

The cause of laminitis can be traced back to a horse’s diet of eating too much grass or too much rich grain, so it is important always to watch your horse’s diet. Another potential health problem is Equine Metabolic Syndrome. Equine Metabolic Syndrome can lead to a horse becoming obese, an increased chance of developing laminitis, and insulin resistance.

Again, this issue concerns a horse’s diet and can be preventable with the right care and attention. These conditions are avoidable if you keep your horse on a rigorous and nutritional diet and provide regular medical checkups.

How to Get a Haflinger Horse

Haflinger horses are very much sought after because of how well-trained they are and have an easy-to-get-along-with personality. Haflinger horses also have many valuable skills and use, such as driving and trail riding. Their smaller stance makes it easier to mount than other breeds making it easier for other younger riders to begin their horse riding journey.

It is common to find a well-bred and well-trained Haflinger starting at $5000 or more. However, competitive show horses can range anywhere from $10,000 to $20,000 based on your location. While in the market for a Haflinger horse, it is best to find a reputable breeder and seek advice from an experienced trainer before purchasing.

More About This Horse Breed

Interestingly, the Haflinger horse’s breed was almost lost because of World War I. Hundreds of Haflingers were taken and brought in to aid during the war as supply horses. Because of the breed’s history of the origin of the European mountains, Haflinger horses were deemed valuable in battles in the Alps.

But because of the dangerous battles of the war, the breed was almost lost forever. However, once the end of World War I came, three Haflinger stallions remained, providing an opportunity to restore the bloodline. And thankfully, there are about 250,000 registered Haflinger horses today. All this is to say that the Haflinger is a unique horse breed because of its compact size.

However, Haflingers do not find their lack of height as a disadvantage. They can utilize their physical capabilities, such as their strong lungs and stocky build, for various uses.