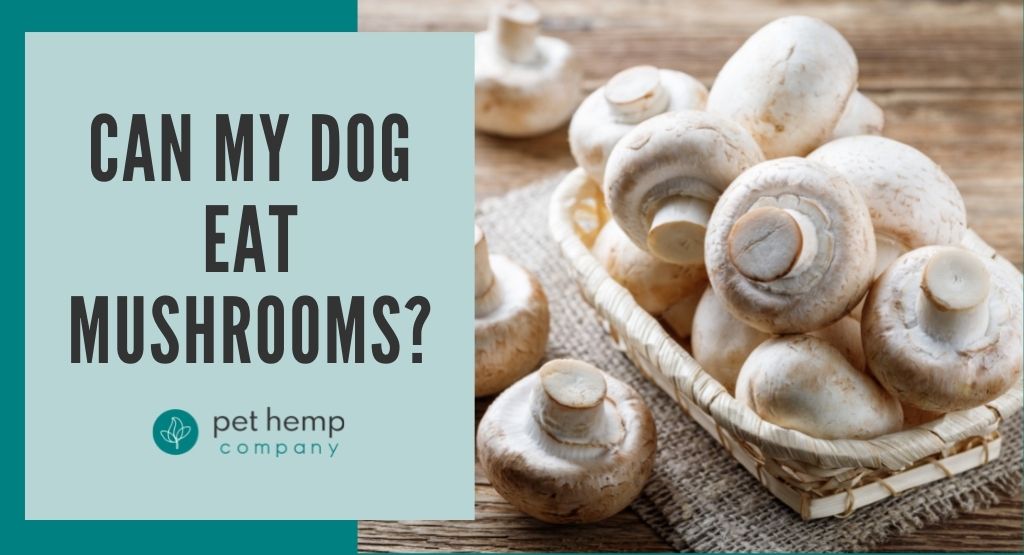 If your pup is fond of going on daily walks, then he’s probably already encountered at least one wild mushroom in parks or gardens. Dogs are especially curious by nature, and it’s highly likely that he might’ve taken a bite of it, thinking it’s another tasty snack.

Even for humans, there are instances when stories about accidentally ingesting mushrooms that turn out to be toxic pop up on the news or in mainstream media. So you’re probably wondering, can my dog eat mushrooms? What should I do the next time I catch my pup nibbling on one?

It depends on the kind.

There are many different types of mushrooms, and some are safer to eat than others. Keep reading to find out more about which mushrooms to look out for and what to do when your dog accidentally eats one.

Can My Dog Eat Mushrooms?

Dogs CAN eat mushrooms, but not all of them. Most of them are generally safe for consumption, but others can be extremely harmful or even lethal to your dog. The tricky part lies in identifying which ones are edible, and which ones are not because even experienced foragers often find it hard to distinguish between the two.

Much like how you’d avoid the idea of munching on wild mushrooms yourself, it’s best to keep your dog away from any stray mushrooms. Most reports of mushroom poisoning stem from people believing they were “sure” that what they had picked was edible when in reality they were toxic.

What Kinds of Wild Mushrooms Are Toxic to Dogs?

It’s challenging to classify which mushrooms are toxic based on appearance alone since a lot of these harmful fungi bear a close resemblance to edible ones. Here are some of the most poisonous mushrooms that can pose a threat to your dog’s health:

What Are the Symptoms of Mushroom Poisoning in Dogs?

Given that there is a large variety of existing mushrooms, symptoms can vary greatly depending on the kind of mushroom ingested. However, here are some of the more common mushroom poisoning symptoms that can be seen in dogs:

It’s important to call your vet as soon as you see your dog eating a mushroom since symptoms often appear quickly. The doctor will most likely induce your dog to vomit in order to get rid of as much of the mushroom as possible. They might also administer intravenous fluids and drugs to combat the toxin. Hospitalization may be required to monitor and manage your dog’s condition.

According to Dr. Heather Loenser, a Senior Veterinary Officer from the American Animal Hospital Association, mushrooms that can be found in grocery stores are not toxic. Since store-bought mushrooms are specifically picked for consumption, it is safe to assume that you can share these with your pup as an occasional treat.

When Are Mushrooms Okay for Dogs to Eat?

As long as you stick to fresh, store-bought mushrooms, then your pup can stay healthy while enjoying a novel snack. As with any other treat, mushrooms must only be given in moderation. Consulting your vet can also be a good way to make sure that you aren’t giving your dog anything harmful.

When Are Mushrooms Unsafe for Dogs?

Most wild mushrooms can be potentially harmful to your pup. Ones that give off a strong, acrid smell, in particular, should be avoided at all costs. However, if you want to take the safest route, then it’s best to assume that ANY mushroom is unsafe for your dog.

The Facts About Dogs and Mushrooms

Is It Safe for Dogs to Eat Mushrooms?

Most mushrooms that you can buy from large-chain grocery stores are considered non-toxic to both humans and pets, so you can safely feed your pup a few mushroom treats from time to time. You also have to make sure not to mix any salt, butter, or other spices while preparing the snacks because such additives could be harmful to your dog.

My Dog Ate a Mushroom in the Grass, What Should I Do?

If you see your dog grab a bite of a random mushroom by the side of the road, then it’s best to call your vet immediately rather than try to identify whether that specific mushroom is safe or not. Prompt treatment is always a priority when it comes to accidental toxin ingestion.

Are Mushrooms Toxic to Dogs?

Out of all known varieties of mushrooms, only about 100 types are said to be poisonous. The amount required to cause poisoning, the time it takes before symptoms occur, as well as the effects it has on your dog all vary greatly, depending on the kind of mushroom ingested.

How to Identify Toxic Mushrooms

There is no sure-fire way to classify which mushrooms are toxic, and which are not. While not completely conclusive, there is a few tell-tale signs that could possibly indicate if a mushroom is toxic. Here are some of them:

One particular mushroom from the Amanita family colloquially called the “Death Angel” is known to be lethal to canines. A news report from 2018 details the death of two dogs caused by Death Angel mushrooms that were found in their backyard, while four others were left seriously ill.

What to Do if Your Dog Swallows a Wild Mushroom

The best course of action if you catch your dog eating a wild mushroom is to take him to the vet for immediate decontamination. If you can, you may take a sample of the ingested mushroom and wrap it in a damp napkin for the vet to analyze. Doing so may help identify which treatments to administer.

How to Keep Dogs from Eating Wild Mushrooms

The best way to prevent your dog from eating wild mushrooms is to clear out any visible fungi from your yard regardless of its kind. You can also keep a toy or snack with you while going on walks so you can easily distract your dog from any stray mushroom that you may encounter.