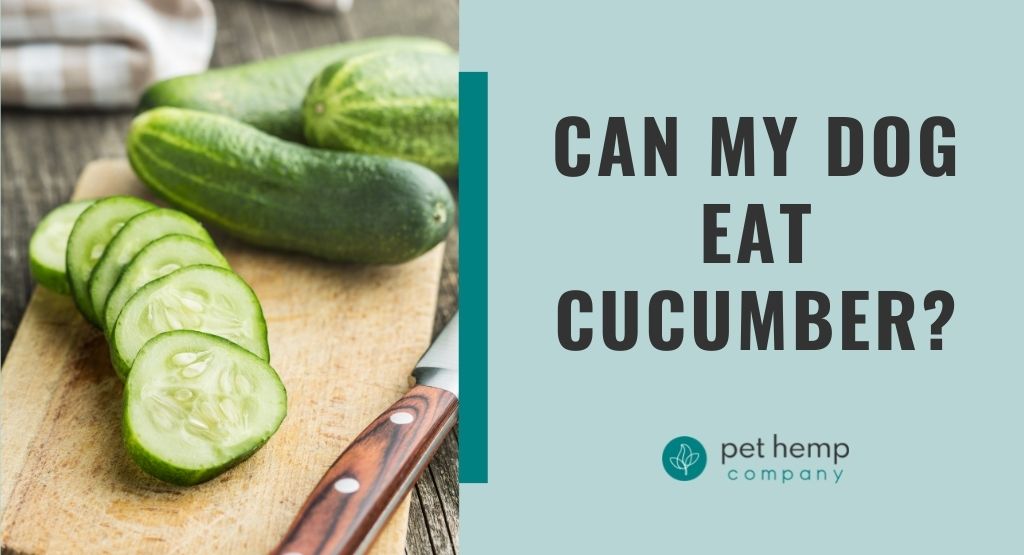 Can My Dog Eat Cucumber

Cucumbers are one of the healthiest fruits available on the market. It is packed with a ton of vitamins and minerals that make them ideal for people who are interested in boosting their overall health and immunity. Sure, it’s good for people, but what about our furry companions? Should dogs be allowed to eat cucumbers?

Pet owners tend to make false assumptions with regards to food they give to pets, which tends to cause more harm than good. Luckily, some fruits and vegetables are safe and healthy for dogs, and cucumber is one of them.

Can My Dog Eat Cucumber?

The short answer is, yes, dogs can eat cucumbers granted that you don’t include pickles on them. Cucumbers contain vitamins and minerals that are important in a dog’s healthy diet. Cucumbers are filled with water, perfect for keeping dogs hydrated, especially on a hot summer day. They are also low in sugar, which is good for dogs who are obese or diabetic (Burke, 2017).

Is Cucumber Safe for Dogs to Eat?

Cucumbers are generally safe for dogs to eat, but as with all things, cucumbers should be given in moderation. Cucumbers must never be a substitute for full meals for dogs as the nutritional value of cucumbers is still not enough to meet the demands of the dog’s body. A balanced diet is still required for the dog to live healthy.

Is Cucumber Healthy for My Dog?

Cucumbers contain Vitamin K, which is good to keep their bones strong and healthy. They also have other vitamins and minerals such as Vitamin B and C, along with phosphorus, calcium, magnesium, and potassium which keep your dogs’ kidneys and liver functioning properly (Burke, 2017; Mikstas, 2019).

About 96% of the fruit’s composition is water, making cucumber an excellent treat to keep dogs hydrated. Cucumbers are also low on calories, which can help dogs who are undergoing weight loss programs, as well as dogs who have diabetes (Burke, 2017; Mikstas, 2019).

Cucumbers can be given to dogs in a variety of ways. Here are some of them (Bess, 2021):

Can Eating Cucumber Be Dangerous for Dogs?

Cucumbers are safe for dogs to eat. However, there are still some things that we should address before we feed these to them. Dogs tend to gobble when they love their food so much, so it would be wise to monitor them when they eat cucumbers as they might choke when they gobble too much (Callaghan, 2019).

Dogs with sensitive stomachs can experience stomach upset. Overeating can also lead to this. When giving cucumbers, especially to puppies or dogs who are about to eat them for the first time, try to give small portions first just to make sure that they can digest them properly.

Some parts of the cucumber such as the skin and seeds can also lead to stomach upset, so it may be a good idea to remove these parts before you give them cucumbers (Burke, 2017). Huge chunks or whole cucumbers may be a choking hazard, especially to small dogs. Chopping cucumbers into small pieces is a good way to prevent this (Callaghan, 2019).

A Complete Guide To Cucumbers for Dogs

Always wash your cucumbers first before you prepare them for your dogs. This is done to remove dirt and pesticides, which can be toxic. Peel the skin of cucumbers then slice them up into rounds or even cubes. Congratulations! You can now give your dogs the cucumbers that you prepared!

Cucumber’s scientific name is Cucumis sativus, and it belongs to the family Cucurbitaceae, the same family as that of zucchinis and watermelons, making cucumber a fruit, which is contrary to the common belief of many that cucumbers are vegetables (“Cucumber | plant”, 2021).

Cucumbers can lower blood temperature and thus, can aid during cases of inflammation and swelling. Cucumbers are also good for diabetic patients. Because they contain phytonutrients, cucumbers can also help address bad mouth odors, but more on that later.

Can Dogs Have Cucumbers?

Dogs are omnivores, meaning they can eat meat together with vegetables and fruits. Cucumber is one of those fruits that are perfectly safe for dogs to ingest no matter what kind of dog you have.

If the puppy has been weaned or is not drinking milk anymore, you can give it cucumbers (Callaghan, 2019). However, the gastrointestinal tract of a puppy is still developing, so only give a small amount.

Are Cucumbers Bad for Dogs?

Cucumbers are one of the healthiest foods that you can give to your pets. The only time that you cannot give cucumbers to them is if they have sensitive stomachs or if they are allergic to cucumbers.

Health Benefits of Cucumbers for Dogs

Cucumbers are the perfect treat to working dogs since they are low on calories. This is perfect for maintaining their weight while at the same time keeping your pets hydrated. Cucumbers are also the perfect replacement for pet store-bought treats that are filled with additives and preservatives that can be harmful to pets in the long run.

Nutrients in Cucumber for Dogs

Cucumbers are packed with Vitamin K and Calcium, which are required for bone integrity. Other vitamins and minerals include Vitamins B and C for strong immunity, and phosphorus, magnesium, and potassium for kidney and liver health. Phytonutrients or phytochemicals are present in cucumbers that can aid during inflammation.

Eating it raw is the best way to eat cucumbers for dogs. Serving them raw preserves the nutrients packed in the fruit, making cucumbers one of the healthiest snacks available for dogs (Burke, 2017). Dogs also like the crunchy sensation when you feed them raw cucumbers, just like commercially produced treats.

Fruits and vegetables typically contain vitamins and minerals in their skin. The same is true with cucumbers. Some dogs, however, may find cucumber skin hard to digest, so it’s a good idea to remove the skin before feeding them cucumbers (Callaghan, 2019). Pesticides may also be present in the fruit’s skin and this can be highly dangerous for pets.

Before giving them cucumbers, it would be wise to wash the fruits thoroughly first.

Fruit and vegetable seeds can be toxic to dogs however, cucumber seeds are generally safe for dogs. Cucumber seeds are as healthy as the fruit itself so including them in cucumber treats is perfectly safe (Callaghan, 2019).

Cucumbers are healthy for dogs. However, pickles are a different story. Pickles contain high amounts of sodium and the spices used can be toxic to dogs, so it is not recommended to feed dogs pickles (Burke, 2017).

Fruits and vegetables typically contain phytochemicals, substances that have anti-inflammatory and antioxidant properties (Mukherjee, Nema, Maity & Sarkar, 2013). Cucumbers also have phytochemicals that can help in freshening up your dog’s breath, as well as destroying bacteria that cause mouth odors.

Despite this, cucumbers are not toothpaste substitutes. Dogs still need to get their teeth brushed regularly even if they are eating cucumbers.

How to Give Cucumbers to Dogs?

When giving cucumbers for the first time, it is advisable to feed dogs with just a small amount first, then wait for at most a day before feeding them more. This is to test if dogs will have a reaction when you feed them cucumbers (Callaghan, 2019). Also, keep in mind that reactions vary from dog to dog when you feed them something new. Thus, it’s best to call your veterinarian if something comes up.

Some dogs don’t exactly chew their food well so it’s best to cut cucumbers to tiny bite-size pieces before feeding them. This can prevent your dogs from choking from cucumbers.

There is a ton of other fruits and vegetables that are healthy and safe for dogs to eat. Listed below are some of them (“Fruits & Vegetables Dogs Can and Can’t Eat”, 2019):

Can dogs eat cucumbers? Yes! Is it safe? Yes of course! Is it healthy for dogs? Definitely! Cucumbers are very safe and healthy for dogs as it has so many benefits to their bodies. Always remember to wash cucumbers thoroughly, peel them, and cut them into tiny pieces before serving them. Always feed them in moderation to prevent stomach upset.

When prepared correctly, your dogs will be more than happy to eat them!