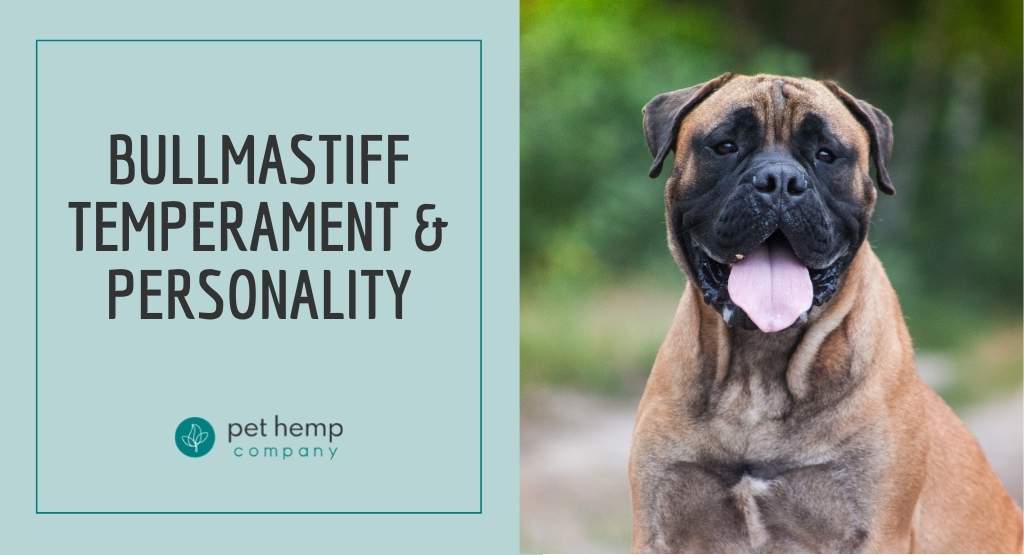 What do you need to know about the Bullmastiff dog breed, and what does it mean to own one? First, Bullmastiffs are very loving but large dogs. If 10 pounds of fluff and muscle, large amounts of drool, and the need to squeeze on your couch to sit down sound like the ideal canine companion, you will not mind keeping a Bullmastiff in your home!

However, be mindful of the responsibility that comes with the large size. You need to own a home or living in a space that accommodates a dog that size. Also, make sure you are patient enough to train the dog yourself or hire a trainer. Because of the breed’s large size, you cannot allow a Bullmastiff to take charge. Make sure that it understands early on that you are the boss.

The Bullmastiff is a breed of domesticated dog with a short muzzle and a rock-hard build. These dogs fall into the “mastiff” type, developed and trained by gamekeepers in the 19th century to guard their estates.

The Bullmastiff is a breed developed via fusion of two other breeds – English Mastiff and Old English Bulldog. Their hair can be red, brindle, or fawn. The Bullmastiff dog has a lifespan of 8-10 years.

The common adjectives used to describe the temperament of Bullmastiffs include:

Growing to a height of 27 in (male: 25 – 27, female: 24-26) and weight of 130 lbs (male: 110 – 130 lbs, female: 100 – 120 lbs), Bullmastiffs are affectionate and gentle. However, their laid-back attitude with family members can change upon the intrusion of a stranger. They are suspicious of people they meet for the first time. Thus, these dogs are among the group of dogs that are used to discourage intruders.

Although Bullmastiffs may have animosity towards strangers, they do not bite that often. When they do resort to biting, they charge fast to inflict a powerful bite. Also, Bullmastiffs are hostile towards other dogs of the same sex. If not trained to be friendly, they can inflict severe injury to other dogs. 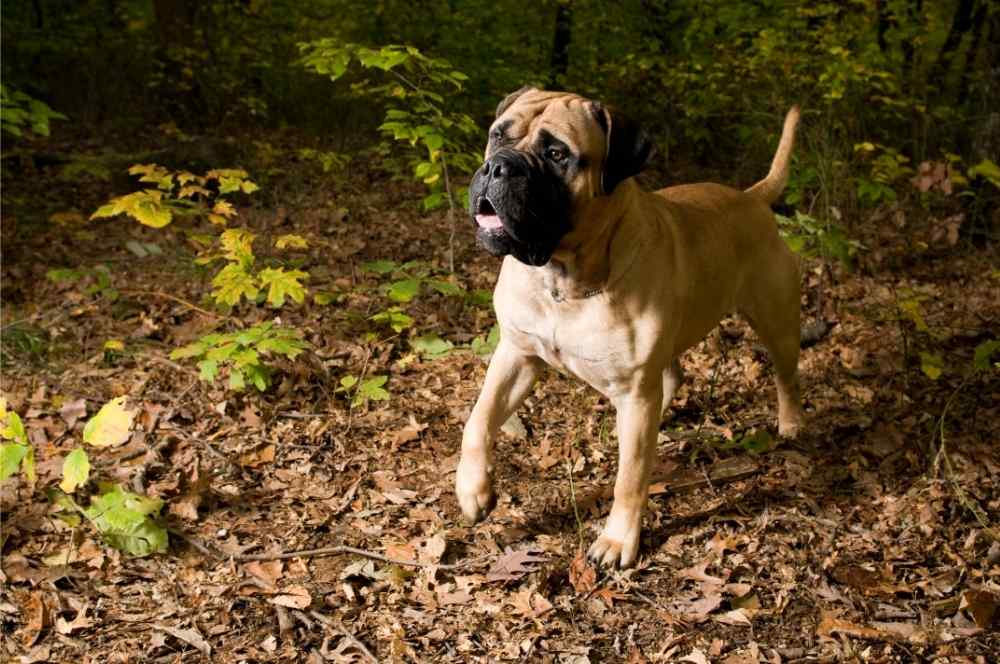 History of the Bullmastiff

This Bullmastiff breed was nicknamed “The Gamekeeper’s Night Dog,” a fitting description considering its history. In the 19th century, gamekeepers had to stave off poachers who were targeting vast country estates.

Since the penalty for poaching was death, poachers, when cornered, would choose to shoot it out with gamekeepers rather than face the gallows. Gamekeepers bred a new breed that was tractable enough to hold but not to harm a poacher. The new breed was a combination of mastiff (40%) and bulldog (60%).

The Bullmastiff entered dog shows in England, and by 1924, it joined the ranks of the Kennel Club of England. Full recognition of the Bullmastiff breed was granted by the American Kennel Club (AKC) in 1933. Some similar breeds include the Great Dane, Tibetan Mastiff, Dogo Argentino, and surprisingly Pugs.

The Bullmastiff has a flat face and shortened muzzle. Flat-faced breeds often suffer from breathing issues, but that does not apply to the Bullmastiff. A family caring for a Bullmastiff has a loyal and loving companion with an easy-going nature. Take extra precautions when this dog is around your children. It can easily knock a child over because of its large body. Provide lots of training and socialization. Expose the dog to new people, situations, and places, and do this while the dog is still a puppy.

One rescue service for Bullmastiffs in the US is the American Bullmastiff Association Rescue Service or ABARS.

If you want to join a community of Bullmastiff fanciers, one great place to go is the American Bullmastiff Association. The group aims to educate and share expertise among members.

Rowdiness is a trait of Bullmastiffs, and when young, they do exuberant jumping. Carefully supervise the puppy. While it has boundless energy, its play must be carefully managed to avoid injury to developing joints.

Perform daily checks on the dog’s skin wrinkles. Check for inflammation. If it has skin problems, use a clean, damp cloth to wash the affected area. After washing, dry the skin and coat thoroughly. Moisture left in wrinkles can result in sores and swelling. Consider consulting your vet to avert the worsening of any skin problem.

Brush the dog weekly with a bristle brush. Its short coat is dense and resistant to the elements. Also, Bullmastiffs do not shed much. Infrequent bathes can help preserve its coat’s natural oils and ability to resist the elements.

When cleaning the dog’s ears, make sure to use a vet-approved cleaning solution. Your vet will also advise on the frequency and method of cleaning your dog’s ears. Keep the dog’s nails trimmed to avoid developing joint problems. Failure to keep the nails trimmed will force the dog to shift its weight, leading to muscular or skeletal issues.

Brisk walks are an excellent exercise for Bullmastiffs. They enjoy walking so much but take extra care if the dog is still a puppy. Over-exercising is unhealthy for a puppy, especially in a period of rapid growth.

Bullmastiffs are not the ideal breed if you want a canine as a running partner. This breed is not well-suited for running, as it is known to be brachycephalic, which means: 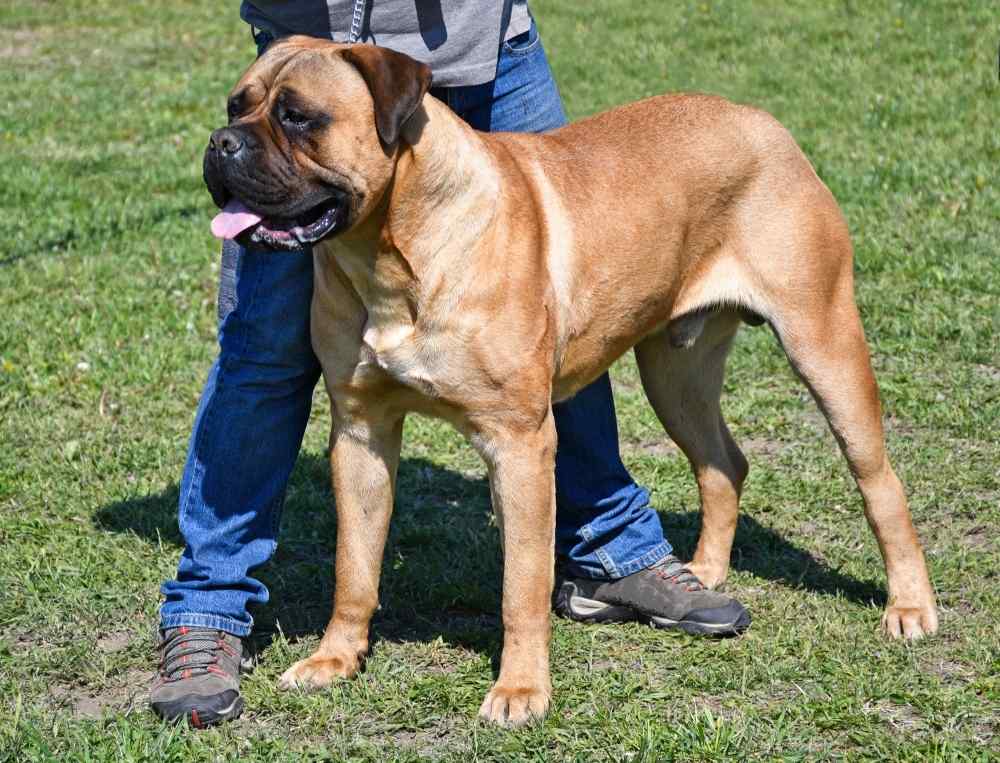 Pay attention to your Bullmastiff’s health and grooming. The breed has low-maintenance coats, so a weekly brush is enough for removing dead hairs. Keep the dog in good shape by feeding it two times a day. Food should not be available all the time as your dog is prone to weight gain. In terms of health, the Bullmastiff scores very low. Control carbohydrates in your dog’s diet with meat as the main component.

Health problems among Bullmastiffs include cardiac problems and issues related to their intestines, eyes, skin, and bones. Skin problems are generally due to the wrinkly skin that these dogs have. Ligament and bone issues stem from their dense and heavy-boned skeleton.

The Bullmastiff’s skin is prone to irritation and sores. They are also prone to contact and inhalant allergies, including:

Atopy is one usual skin problem with the breed, affecting skin folds, belly, ears, and feet. Symptoms develop from age one year old and worsen as years pass by. Common signs of the disease include:

Stomach bloating is a usual health issue with dogs that have deep, narrow chests. That means your Bullmastiff is prone to bloating, and bloating causes your dog’s intestines to twist and fill with gas.
When that happens, the blood supply to the stomach decreases. That can also happen to the dog’s spleen. Restlessness is one of the signs of bloating in dogs.

Bullmastiffs with heart conditions face a life-threatening health problem. Foremost of these diseases is DCM or cardiomyopathy, wherein the heart becomes large, thin, and weak. The condition compromises the ability of the heart to pump blood.

Two eye problems to watch out for are:

This disease is a hormonal disease, where the thyroid gland does not secrete enough of its hormone into the body. It is not life-threatening, but mental and physical sluggishness is observable. Bullmastiffs contract this disease by the age of 2-3 years.

These symptoms relate to the slow metabolism that hypothyroidism causes.

In the case of urinary issues, the most common among dogs is urinary tract infections. The condition is due to the presence of bacteria. Symptoms include straining to urinate, presence of blood in the urine, foul smell, and cloudiness.

Growing Bullmastiffs can develop painful inflammation in the long bones of their legs, starting at around six to ten months of age. The pain can shift from leg to leg and result in an abnormal gait. Upon medical check, your vet may require rehabilitation exercises for such a condition.

Avoid allowing your Bullmastiff to grow fast. That might cause the cartilage at their joints not to attach to the bones properly. Weigh your puppy regularly and avoid over-feeding. Also, do not use calcium as a supplement.

Characteristics of the Bullmastiff

The temperament of the Bullmastiff dog breed is described as:

These dogs are a working breed with a low and infrequent barking level. They are a high-intelligence working group of dogs with a propensity to be suspicious of strangers.

Do not overfeed Bullmastiffs as they can grow too fast, which can hamper their musculoskeletal development. For the same reason, limit carbohydrate-rich food and focus on providing more protein-rich stuff.

Do not feed more than two times a day, and avoid supplements, such as calcium. 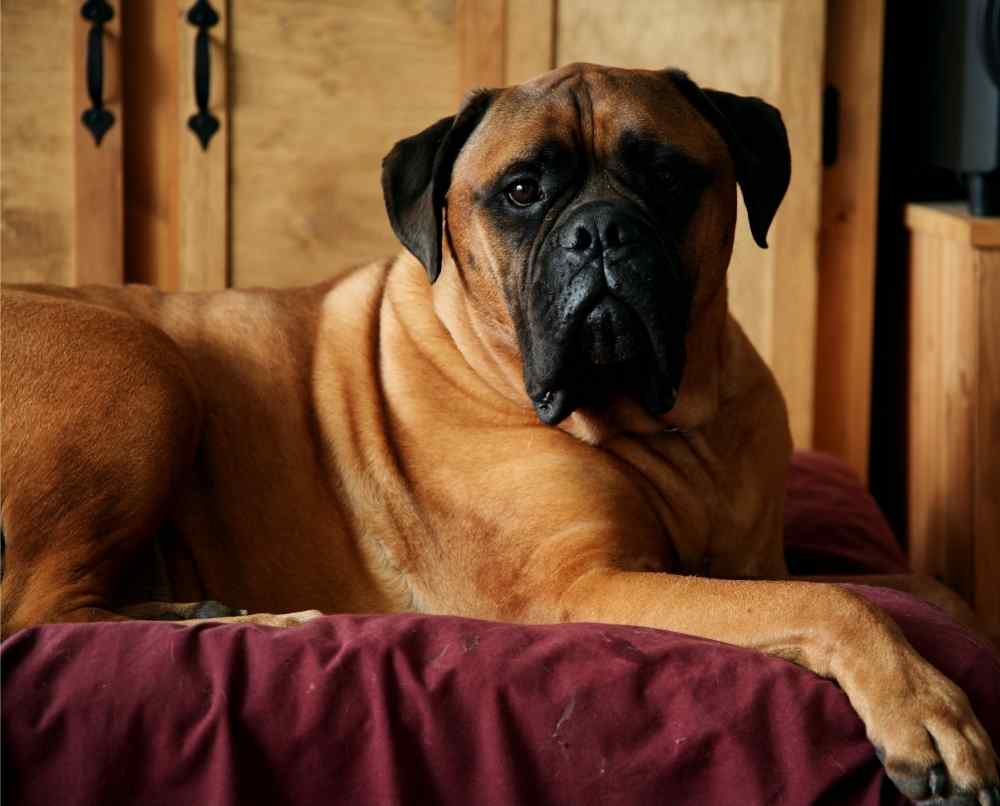 Where to Adopt or Buy a Bullmastiff

Bullmastiffs are a common breed in the US. For adoption information, reach out to the American Bullmastiff Association Rescue Service or the AKC. Depending on where you look there are many classified dog breeds. Out of the 189 breeds listed by the AKC, the Bullmastiff ranks 48th (1 being the most popular).

Vaccinating your dog is your responsibility as a pet owner. For a Bullmastiff puppy, vaccination may be advised at about the sixth week and another at about the 12th week. Another schedule may be required for the 16th week. After that, your vet may schedule subsequent annual vaccination.