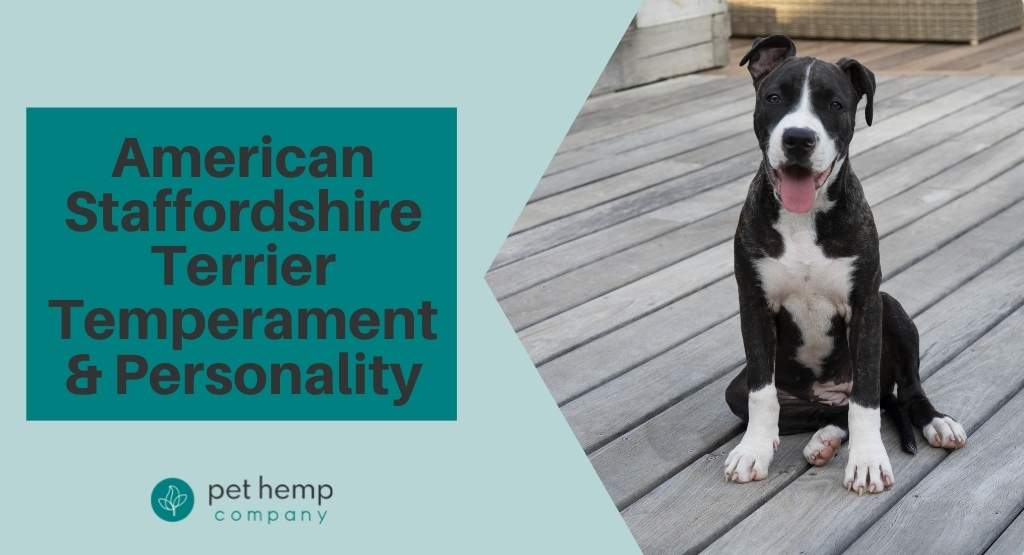 With all these wonderful characteristics, why aren’t American Staffordshire Terrier more popular? As it turns out, they have a deadly and unfortunate history as one of the most commonly seen breeds in animal fighting rings due to their tenacity and muscular builds. However, the American Staffordshire can make the perfect pet to raise children with as long as they are in the right family! Let’s take a deeper look at this beautiful breed.

About the American Staffordshire Terrier

American Staffordshire Terrier belongs to the Terrier group and is often called “AmStaffs” by fans, friends, and families. Famously known for being strong and muscular due to its huge size, the American Staffordshire Terrier is actually very sweet and affectionate deep down. When they are presented with any activity involving their favorite humans, they pour out their best energy to enjoy every second of it. Such activities might include running, playing, or training.

They are passionately courageous, intelligent, and eager in doing various activities such as dog training, which they are very good at. Since they are competitive, when things don’t go their way like they imagined it to be, they tend to divert their attention to other things.

Curious about the various traits an American Staffordshire Terrier has? See this list and its respective ratings through bones! 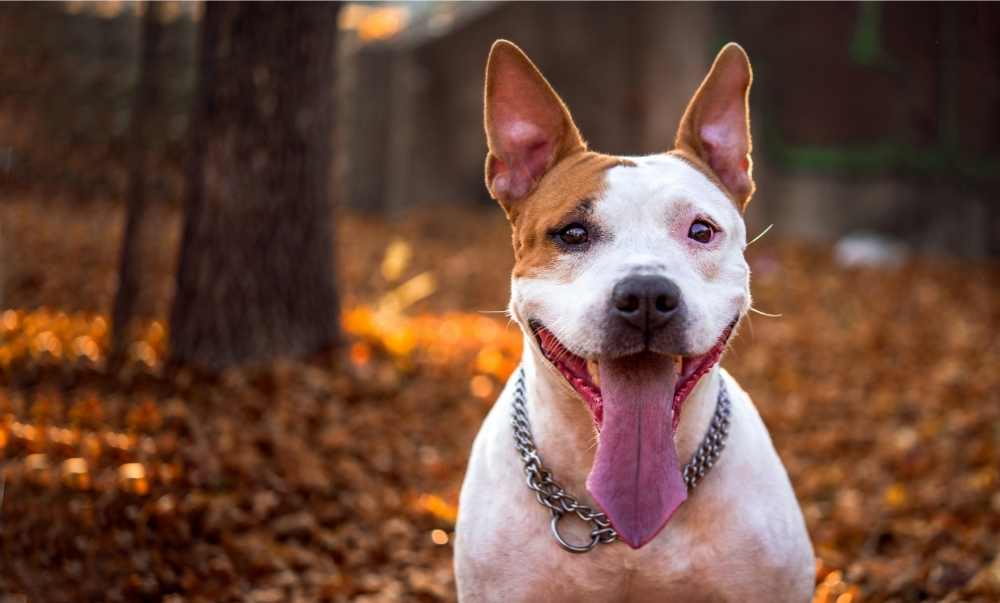 In the 18th century Great Britain, the earliest Terrier dog breeds began as fighting and baiting dogs, fighting bears and bulls in baiting blood sports because of their bold and aggressive personalities. Due to the controversy of these blood sports and dog fighting rings, they were banned in 1835.

The most common Terrier breed before were the courageous bull-types (i.e. Bulldogs), which were the earliest ancestors of the American Staffordshire Terrier. Their genetic makeup caused various arguments in which some involved the mix of White English Terrier and Black-and-Tan Terrier, claiming that their genes came from them.

Through the years, the aggressive fighter in this breed transformed into a sweet, peace-loving, and a mellow furry friend that people love. The American Staffordshire Terrier even made a series of appearances in films, documentaries, logos, and wars (like the K-9 Sgt. Stubby, who served his duty during the First World War, earning praises from US president that time!)

“It’s not always rainbows and butterflies” can also be applied to this dog breed that has its fair share of behavior problems. They are not always kind and mellow – they can be dangerous if they feel threatened or scared.

So concerning about their behavior?

The question is, how do owners take care of them?

Like any other animal, American Staffordshire Terriers should have their regular veterinary check-ups. Proper grooming care for this breed consists mainly of four things: teeth, ears, nails, and coat.

American Staffordshire Terriers have plenty of energy, so they need to expend that energy somehow. If they don’t get enough exercise, they’ll feel restless and bored, leading to destructive behaviors.

We recommend giving them about 1-2 hours of daily exercise for improved physical and mental health. Moreover, their competitive nature allows them to participate in canine sports or search and rescue training to showcase their athleticism and agility.

Make sure you have a brush, water, soap, and a nail cutter ready to properly groom an American Staffordshire Terrier dog.

Use a soft bristle brush in brushing their short, stiff coats at least once or twice every week. Brushing helps get rid of dust and dirt while distributing the natural skin oils for a shinier coat and healthy skin. When you wash them, use vet-approved, dog-safe shampoo to keep them smelling great and squeaky clean.

When you clip their nails, use a nail cutter for dogs to trim them properly. Trimming too far can hurt your dog since dogs have nerves in the base of their nail. And finally, you can buy special dog ear-cleaning solutions to clean out any trapped dirt and prevent further infections.

American Staffordshires need high-quality dog food with plenty of natural proteins to keep them strong and in shape. Give them diets meant for medium to large dogs that have moderate energy. Make sure to give them healthy ingredients and no foods high in fats, sugars, sodium. You also want to avoid giving them a grain meal or chicken meal, which are just filler ingredients that can contribute to obesity.

American Staffordshires tend to easily gain weight, hence their overweight or obesity problems. Be sure to monitor their diet closely at first and adjust their food based on their age (puppy, adult, senior). You may want to constantly give them treats or food, but vets recommend that you keep that to a minimum. It’s always best to consult your veterinarian for more specific advice! When choosing food or treats look for nutritional options with healthy additives.

American Staffordshire Terriers are considered medium to large-sized dogs. Here are some of their features for the breed:

If you’re an owner of an American Staffordshire Terrier Dog, there’s no need to worry, given that this breed is known to be a generally healthy breed. However, they can still experience some common health issues.

An American Staffordshire Owner should take note of the following health problems concerning this breed:

For serious problems in their later life, these include:

An American Staffordshire Terrier needs nutrition according to their age group, based on the energy level they need. It is still best to consult a veterinarian for the proper diet they should have, also to prevent some common illnesses.

Although their needs vary according to age, it is still nice to know that they need a specific amount of protein and carbohydrates in their body. And remember that they need to stay hydrated at all times! 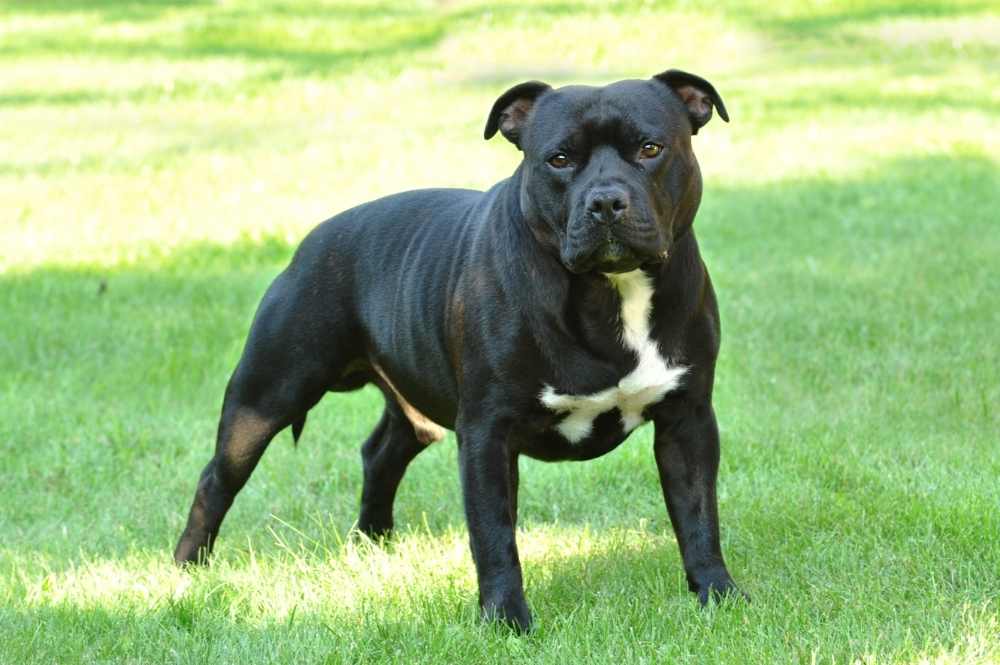 The average lifespan for an American Staffordshire Terrier is about 10-16 years!

Where to Adopt or Buy an American Staffordshire Terrier

There are numerous ways and places on where to buy or adopt these American Staffordshire Terrier dogs. It is important to know where and how, so you can take note of their rules as well. Some of which are as follows:

More About the American Staffordshire Terrier

Despite their strong and intimidating physique and appearance, American Staffordshire Terriers are very much like human beings. They can be very stubborn, leading to destructive behaviors and tantrums, but they can be especially sweet, caring, and affectionate with proper guidance training.

Although they have a rough history of fighting in the right, they still grew up to be the beautiful, bold breed we know and love today. They still carry a negative stigma of being aggressive dogs, but they are better lovers than fighters!

American Staffordshire Terriers make natural additions to any family, given that they are willing to put in the time to train and spend time with them. They are built to protect and fight for the ones they love! There’s a reason why so many people love this breed! To learn more about other dog breeds click here.