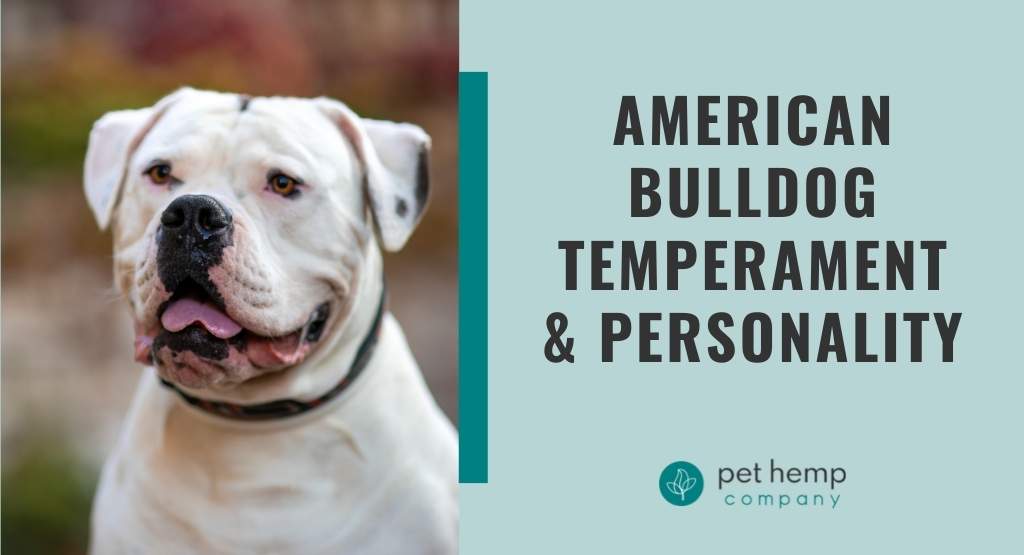 Owning a huge, grumpy bulldog may not sound a good idea for most people. Without proper socialization and training, dog aggression and temperament are serious problems in the long run. But invested dog owners who have already mastered the art of raising bulldogs know how incredible these sturdy canines are. If you are keen and brave enough to raise a bulldog, the American Bulldog dog breed might be for you.

Known for their exceptional strength, agility, and protective instincts, American Bulldogs, may ensure safety and security in your home. These large-sized canines can also be fairly treated as the sweetest and most affectionate family dogs in the world. They are extremely loyal, fun, and friendly.

Despite their bulky stature, they are gentle with kids and love to cuddle all the time. American Bulldogs are indeed a great addition to your family with their excellent protective instincts and loving personality. For more information about the breed, you’ve come to the right place. 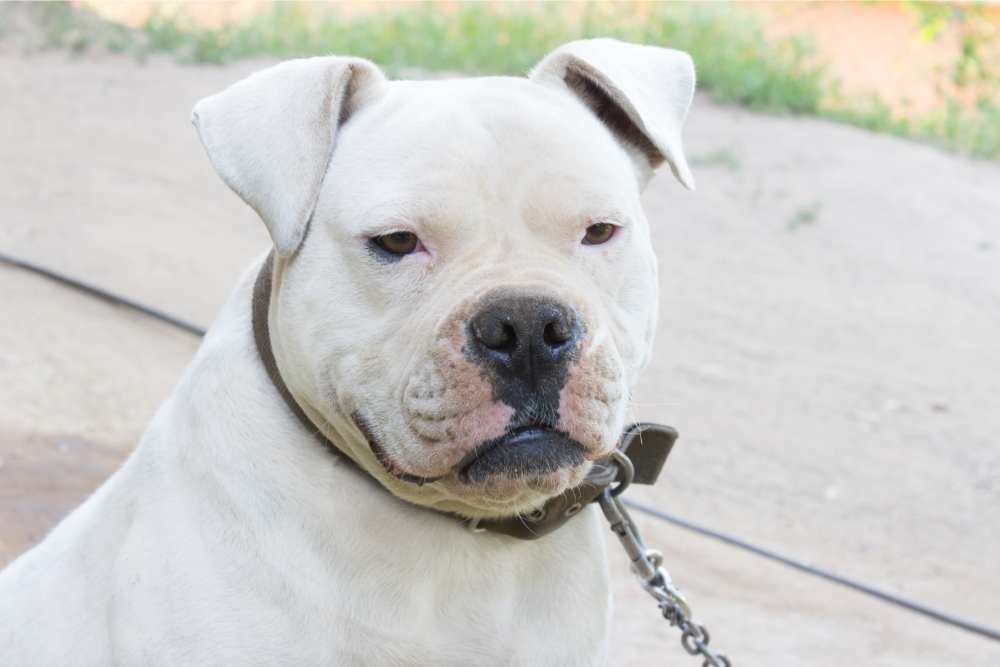 American Bulldogs are easily identifiable by their stocky, muscular build with strong and sharp facial features. The square, large-sized head is perfectly matched with a pair of muscular shoulders.

Most American Bulldogs don a short and smooth coat that requires minimal grooming and care throughout the year. The breed’s prominent, muscular, and well-built jaws are strong enough to catch anything in their jaws. However, it is important to note that American Bulldogs are not aggressive by nature. Their boxy looks do not equate to hostility or aggression.

Traditionally, American Bulldogs are white with red, black, brown, tan, or brindle patches. The typical color of the eyes is brown, and the eye rims are mostly black. According to the American Bulldog Breeders Standard, black is the preferred nose color, though brown, red, or grizzle are permitted.

The lips are typically black, although pink is evident sometimes. The breed’s two front legs are straight and heavy-boned, while the hindquarters are significantly thick and packed with well-defined muscles. American Bulldogs have a docked or natural tail that is relatively thick and low-set.

American Bulldogs are typically friendly, playful, and affectionate. They are also highly intelligent dogs that can easily follow commands and perform basic and advanced dog skills. Often called “gentle giants” because they are extremely loving and gentle to their humans. American Bulldogs have a huge fondness for children, and they love long warm cuddles. They are also labeled as “lapdogs.” They love watching over their favorite humans at all times. They cannot tolerate too much isolation and long periods of inactivity.

Due to their exceptional protective instincts, American Bulldogs are considered excellent guard dogs or watchdogs. They can get highly territorial, intuitive, and aggressive, especially when a perceivable threat or danger within their territory. These guard dogs can be overly suspicious of strangers even they act calm and friendly. Socialization training is especially helpful to improve their interactions with humans and other animals. The good thing is, they are exceptionally intelligent, eager, and highly trainable.

As stated above, the American Bulldog dog breed is not for everyone. American Bulldogs need skilled and experienced dog owners who can provide all their needs and tolerate their temperaments to maximize their full potential. Since they are extra-active and highly intelligent canines, it is best to provide them with mental stimulation and challenging activities that will effectively develop their skills. American Bulldogs never run out of energy; thus, they need one to two hours a day of physical exercises and mental stimulation to keep their health and well-being in an optimal state.

Walking is the best physical exercise to improve the breed’s mental abilities and senses. A daily 30-minute walk will help the canine utilize its stagnant energy and make time for socialization. Walk your pup regularly at a moderate pace. While American Bulldogs can tolerate high-intensity exercises, it is still safe to provide them simple daily routine exercises such as walking, running, jumping, or swimming. They also love playing interesting and lively games like Frisbee, Jolly Ball, Flirt Pole, lacrosse, and American football.

Training an American Bulldog may require enough patience and determination to reap excellent results as with any large dog breed. Staying calm and composed at all times is the main requirement to make everything possible. Showing too much authority and anger might cause your dog to exhibit aggression and other defensive behaviors. When stating commands, make sure it is clear and concise. You can utilize hand gestures or show your dog the same action or movement to be performed. For best outcomes, use positive reinforcements such as giving rewards and treats.

If you think you lack the capabilities to train your American Bulldog, you can enroll him in any dog training institution to teach him basic obedience skills. However, this can be costly and time-consuming. The truth is, you can effectively train an American Bulldog at home. Simply giving them sufficient time, love, and attention can develop their behavior and special skills. Remember, a well-loved dog is most likely to remain calm, behaved, and obedient all the time.

In the 17th century, bulldogs were among the few animals used in bull-baiting, cattle-droving, and farming in England. When bull-baiting, a popular blood sport in the 17th and 18th centuries, was abolished, these canines were domesticated and became a historical symbol. They were later on brought to North America and became part of the agricultural industry. They were utilized as farm dogs in the ancient American farm industry due to their exceptional strength and power.

The breed, later on, became loyal companion dogs in thousands of American households. In the late 19th century, the breed was officially named American Bulldog in honor of its most significant contributions to American culture and colonization. As of this writing, the breed is one of the most popular breeds adored by the general public.

American bulldogs possess excellent general health and longer life expectancy (10-15 years). Ideally, these guard dogs can live from 10 to 15 years. But like most breeds, American Bulldogs are also vulnerable to certain dog illnesses that may negatively affect their quality of life and general health.

The breed is brachycephalic, a medical term that means having a severely compressed skull from back to front. This condition can lead to lower oxygen supplies in the blood of the canine. This is the reason why they struggle exercising during hot seasons. It is important to keep them hydrated and well-oxygenated.

These are the most common medical conditions that affect the American Bulldog dog breed:

Genetic disorders such as elbow or hip dysplasia are common in large-breed dogs such as American Bulldogs. This skeletal disorder can cause general paralysis and impaired physical activities in dogs. Common symptoms of the disease include lameness, a swaying gait, joint pain, and loss of strength and muscle mass in the elbows or thighs. Treatments available include corrective surgery, Nonsteroidal Anti-inflammatory Drugs, and weight management.

This is a genetic skin disease in canines that results in flaky skin, shabby coats, and skin redness. The disease typically affects young American Bulldogs (1-3 weeks old) but can also affect older dogs. Ichthyosis makes the canine more susceptible to infections and can be deadly when not treated early. To manage Ichthyosis apply moisturizing oils, fatty acid supplements, and retinoids.

Cherry eye is another genetic disorder in American Bulldogs that occurs when the third eyelid detaches from the dog’s eye and causes obstruction in the tear duct that eventually leads to eye swelling and redness. The most common symptoms of the cherry eye are a pinkish or reddish mass in the eyes, inflamed eye membranes, eye pain. Treatments available include antibacterial medications, warm eye compress, and relaxation exercises.

Caring for American Bulldogs is simple and not time-consuming. Promoting wellness, giving constant mental stimulation, and providing a calm environment are the topmost priorities for the breed to thrive.

Hygiene is another aspect that you need to take into consideration. Giving regular baths and providing oral care can also help improve their overall well-being. Like all large dogs, American Bulldogs need to have a personal space at home for them to play, rest, and sleep. This will make them feel safe and secure at all times. If you own an American Bulldog, you can give him toys to play with during his leisure time.

But most importantly, consult your vet or nutritionist-dietician about your furry friend’s nutritional needs. It is still best to seek help from animal experts.

American Bulldogs have a short and soft coat that is mostly white with black, brown, red, or brindle patches. These watchdogs are not heavy shredders. They shed moderately throughout the year. They also require minimal grooming. However, American Bulldogs may tend to drool excessively. To slow their drools, try giving a bath and regular oral care. Trim their nails and clean their ears every other week or as needed. Overall hygiene and grooming prevents microorganisms that cause infections and other dog illnesses. 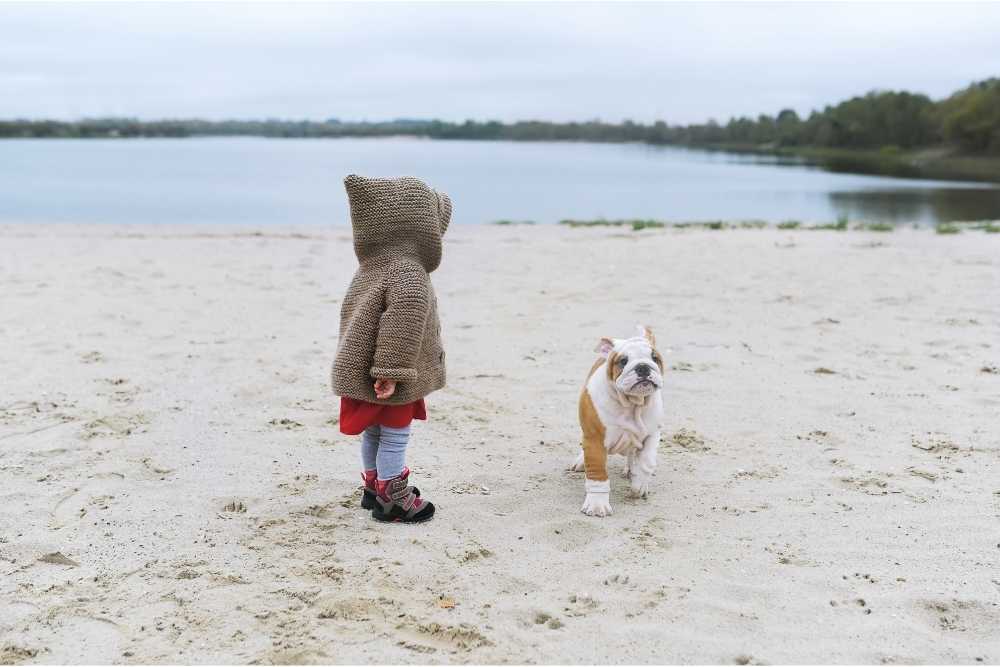 Remember, most Bulldogs adore children so much. While this is a positive statement that promises to ensure the safety of children in their hands, it is still best to train your canines on handling kids. If possible, never let your canine play with your kids unguarded. They are still large animals that can potentially cause harm to your little angels.

Bulldogs can easily get along with other pets. They love interacting with other animal species, and they are curious about what they can do together. With proper training, these gentle canines can easily gain friends outside their homes. Just a tip: do not leave them to play with other pets unsupervised. This might lead to an animal fight or accidents. Allow them to explore the world, but keep watch.

Here are some of the most exciting facts about the American Bulldog:

This breed is genuinely affectionate, loyal, and loving large-breed dogs. They are also highly intelligent and protective. Despite their large size, they love long, warm cuddles and kisses. They also adore kids so much.

The breed can protect their family at all costs and can stay with their masters until eternity. Indeed, owning an American Bulldog is one of the best life privileges.